If I Were Tony Snow, I'd Have My Own Questions for the Gaggle

If I were Tony Snow for a day…
I would have my own set of questions for the White House Press gaggle:

* How many of you published or reported the rumors of 100,000 or tens of thousands of refugee families in Iraq?
* To those of you who published this rumor, were you able to interview any of the tens of thousands of refugees from sectarian violence?
* To those of you who printed this rumor, would you please help direct us to these refugee camps since we are not able to locate them.
* Bonus Question: Why do you suppose the Iraqi government has turned down offers of assistance for these displaced refugees? 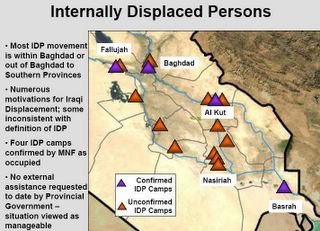 Confirmed Internally Displaced Persons camps in Iraq. (Iraqi Freedom Coalition Forces)
Note 1: No assistance has been requested by the Iraqi Government to date.
Note 2: The Basrah camp has 43 families instead of the 500 that was rumored.

…Another indicator for civil war would be forced population movements. And we are extremely sensitive to that. We see reports of tens of thousands of families displaced here in Iraq, and we chase down each and every one of those reports. And I’ll show you detail in a minute. But we have seen some displacement, pockets of families moving, but not in large numbers. The next graphic will give more details.

So if there are indeed 36,000-plus families that have been displaced, we’re not seeing it.

And then when we got the report of 500 families displaced in Basra, we went to confirm, and all we could find was 43 families.

Prairie Pundit has much more on the civil war indicators discussed by Major General Rick Lynch.

A new estimate by one of Iraq’s vice presidents has put the number of families who have fled their homes at 100,000, a number far greater than recent projections by other Iraqi officials and one that further clouds the debate over how deeply sectarian conflicts are affecting the nation.

This number certainly was a “number far greater than recent projections” from 2 days earlier!

Ofcourse this story was republished thoughout the world as fact, at least 357 times was the number reported at Google.

This continued in the mainstream media on Sunday including the AP’s version:

New estimates of displaced families in Iraq as violence continues

So, by Monday this displaced persons news along with the fact that it “was caused by sectarian violence” is ingrained into the mainstream media reports:

Tens of thousands of Iraqis have fled their homes in mixed Sunni-Shiite areas because of sectarian violence, some of it caused by militias allied with Iraqi political parties.

How many more times will we hear these exaggerated numbers repeated and how much do you want to bet that Rep. Hawk Murtha uses this 100,000 number in his next speech?