Powerline offered two pieces of free advice to the Bush Administration yesterday on how to regain his approval from the public, both excellent ideas 1.) Hold a news conference on imigration saying how you are now ready to close the borders (Maybe from the Arizona or Texas border?) 2.) Threaten to veto any spending bill that contains a single earmark.

Despite constant attacks by the democratic media… 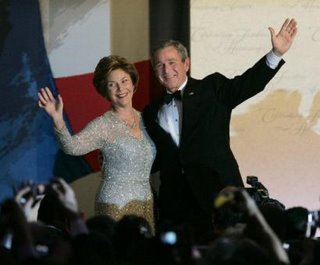 …George Bush had his groove at his Inauguration in 2005.

Here is a third offer of free advice.

Let’s put this in perspective:

* There are no more mass graves being filled by the Saddam regime in Iraq
* Women can work in Afghanistan
* There are no longer rapists on the payroll in Iraq
* The country has won two wars in very hostile territories in record time with minimal (record) fatalities
* You’ve helped set 50 million free from brutal regimes
* The Butcher of Baghdad is on trial for the evil massacres of his own people
* Libya has given up its clandestime weapons program
* The Ali Khan Nuke Sales Network from the 90’s is out of business
* Most of Al Qaeda leadership has been captured or killed
* Lebanon is on the road to democracy
* There have been countless democratic improvements in the Middle East regimes
* The world has more democracies now than ever
* There have been three successful elections in Iraq
* Afghanistan has had elections and successful parliamentary sessions
* Sectarian tribal leaders in Iraq are joining, praying, renouncing terror
* Al Qaeda in Iraq is desperate and in despair
* The Iraqi people are more cooperative than ever with security
* There have thankfully been no terrorist attacks in the US since 9-11
* Real progress is being made in Iraq
* The economy is in a major boom
* The stock market is nearing its all-time high, overcoming the Clinton Recession, 9-11, the Bubble Bust, and corporate scandal
* Unemployment is lower than it’s average in the 70’s, 80’s and 90’s
* The US leads industrial nations in GDP
* There is record home ownership
* House-hold earnings have increased significantly
* Tax relief continues for all Americans…
* Sadly, the Adminstration has had one person indicted. But, compare this to the culture of corruption of the Previous Administration:

You could go on and on, but sadly George Bush is not getting any traction from reality.

No matter that the stock market is at an all-time high, the media splashes market news on a day the Dow dips with “Stocks Plummet in Late Afternoon Trading”. The media omits good news of tribunal leaders meeting but publishes inaccurate death tolls.

What has the Bush Administration done to stop this immoral reporting from the increasingly biased mainstream media? Well, about the same thing they always done hoping that by doing the same thing over and over and producing better and better results that the media will report honestly… They don’t. There’s a word for this!

So here’s the free advice…
Since it is clear that the mainstream media refuses to report honestly and without bias, the Bush Administration is going to have to get creative with their communication strategy in order to get the good news out to the masses.

That may already be happening.

In his first week in the job, new White House Press Secretary Tony Snow is already having issues with CBS News, and slamming The New York Times and USA Today.

Snow has fired off several emails to reporters. One rapped the Times for continuing to “ignore America’s economic progress,” while another hit USA Today for a “misleading Medicare story.” He also knocked CBS News on Wednesday for Jim Axelrod’s piece on seniors having problems with the Bush drug plan. Axelrod responded today.

White House sources say that Snow aims to counter criticism of the administration in an aggressive manner.

And, of course Old Media, like Old Europe, is having an attitude. Daily Pundit, Sister Toldjah, Kesher Talk (That’s GRREEAATT!), Democracy Project, and Ace have more.

Here is an example of Tony Snow’s work so far:

* But Average Hourly Earnings Have Risen 3.8 Percent Over The Past 12 Months, Their Largest Increase In Nearly Five Years. Hourly compensation rose at a 5.7 percent rate in the first quarter. Personal income rose 0.5 percent in March.

* Securities Prices Show The
Market Believes That Inflation Is Expected To Remain In Check.

* Yesterday, The Dow Jones Industrial Closed Within 83 Points Of An All-Time Record High. The Dow is up 8.6 percent this year and closed yesterday at a six-year high.

* GDP Grew At A Strong 4.8 Percent Annual Rate In The First Quarter. This follows our economic growth of 3.5 percent in 2005 – the fastest rate of any major industrialized nation.

* At $52 Trillion, Household Total Net Worth (Assets Minus Liabilities) Is At An All-Time High And Has Increased 8 Percent Over The Past Year And 33 Percent Over The Past Three Years. The growth is due to both real estate and other financial investments (i.e. it’s not just a result of rising housing prices). Household financial net worth (which excludes housing and other tangible assets) is also at an all-time high.

* The Conference Board Index Of Consumer Confidence Increased In April To Its Highest Level In Almost Four Years.

* Productivity Increased At A Strong Annual Rate Of 3.2 Percent In The First Quarter.

* Real Consumer Spending (Which Adjusts For The Price Of Gasoline) Grew At A 5.5 Percent Annual Rate In The First Quarter And 3.4 Percent Over The Past Four Quarters.

The President Worked With Congress To Reduce Income Taxes For Every American Who Pays Income Taxes. The Administration and Congress doubled the child tax credit, reduced the marriage penalty, cut taxes on capital gains and dividends, created incentives for small businesses to purchase new equipment and hire new workers, and put the death tax on the path to extinction. Altogether, this tax relief left $880 billion in the hands of American workers and businesses.

The Wall Street Journal: President Bush’s Tax Relief Is Responsible For Economic Growth. “Critics continue to complain that President Bush’s tax policies have only benefited the super-wealthy, but that would come as news to the five million Americans who were jobless before the 2003 tax cuts, and thus had no income, but now have a weekly paycheck.” (Editorial, “Help [Very Much] Wanted,” The Wall Street Journal, 4/10/06)

Yesterday, Congressional Leaders Agreed To A Tax Relief Extension Package That Will Help Millions Of Middle Class Families. “Republican congressional leaders agreed Tuesday on a $70 billion measure to extend tax breaks for investors and prevent 15 million middle-income families from being hit by the alternative minimum tax, which was intended to affect only the wealthy.” (Jim Drinkard, “$70B Measure Would Extend Tax Breaks,” USA Today, 5/10/06)

Right on! This is a great start. But, Tony and the president can’t let up… not for three years anyway. Another thing Tony could do is to build up or point out other news sources that are more honest with their reporting. Since, Tony Snow is a fan of blogs, hopefully we will see that happen soon.