I don’t think I have read anything this wacky since they started pulling frozen logs of greenbacks from the freezers of Congress!

The little darlings were so well behaved… 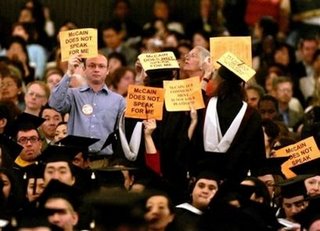 …After all, they did not torch the stage or physically assault the speaker at the New School graduation. (AP)

After the liberally indoctrinated children at the New School Graduation chose not to lynch Senator John McCain at commencement this year, Former Senator and New School President Bob Kerrey praised the graduating students at New School for not rioting at graduation even though a pseudo-conservative was at the podium:

I now speak in defense of the behavior of my students – the minority who protested and the majority who did not. On the surface, some of the tactics of the protest were rude, noisy, and disrespectful. Less obvious, however, was the self-restraint that prevented the protestors from behaving in a fashion that would have shut down the commencement or made it impossible for Senator McCain or me to continue. Though many in the audience – including Senator McCain and I – were offended by the heckling, at no time were we in danger of not being able to proceed. By the end of the program, we had awarded five honorary degrees and graduated 2,630 students in The New School’s 70th Commencement ceremony.

Hot damn! What a smashing success!
The little darlings did not lock the doors and torch the building!

More importantly — and also lost in the charges and counter-charges — is this fact: student protests are a necessary and essential part of democratic free expression. Did we not love the brave and disrespectful students at Tiananmen? Did we not applaud the determination of the student led movements that helped bring down the dictators that ruled Eastern Europe in 1991? Have we forgotten the critical difference students made in reversing an unlawful election in Ukraine or in driving the Syrians from Lebanon or who still seethe in discontent under the religious law of Iran’s mullahs?

Thus, when some of the critics of The New School students suggest they should have behaved with more discipline, as did the students at Liberty University, I strongly disagree. Our students were moved by idealism, not arrogance. I may not agree with their conclusions, but I do not begin with the presumption that my age gives me a privileged view of the truth. Quite the contrary – I believe that those of us who are older should keep our ears and hearts open to the possibility that our age may have cost us the most important of human characteristics: the hope for a better, fairer, and more just world.

Did Bob just equate “conservatism” with “communism”? Now that’s twisted. After all, isn’t liberalism communism-lite? And, sometimes not so lite? That’s nuts. Regardless…

I say crank it up a notch, Bob! Next year invite Ann Coulter! That ought to “bring the house down”, so to speak!