After a federal judge banned the use of prayer at commencement services, graduating seniors stood to say the Lord’s Prayer together during the opening remarks at commencement. 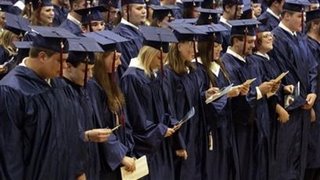 200 of the graduating seniors at Russell County High School ignored the federal judge’s order and recited the Lord’s Prayer to thunderous applause to lead off their commencement ceremony on Friday night:

The senior class at a southern Kentucky high school gave their response Friday night to a federal judge’s order banning prayer at commencement.

About 200 seniors stood during the principal’s opening remarks and began reciting the Lord’s Prayer, prompting a standing ovation from a standing-room only crowd at the Russell County High School gymnasium.

The thunderous applause drowned out the last part of the prayer.

John Stephenson has more on the background around this story that brought the ACLU out into the sticks of Kentucky.

The Anti-Idiotarian Rottweiller has more on the sensitive student who made the complaint to the ACLU. 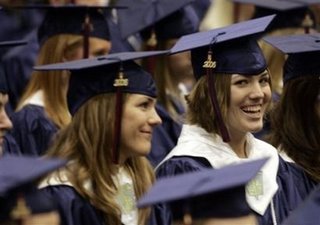 The revival like atmosphere continued when senior Megan Chapman said in her opening remarks that God had guided her since childhood. Chapman was interrupted repeatedly by the cheering crowd as she urged her classmates to trust in God as they go through life. 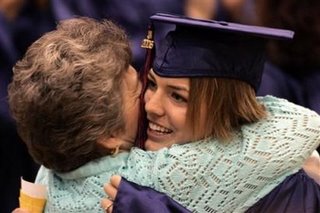 Megan Chapman, right, is hugged by her aunt Patty Hatfield after Chapman delivered the opening remarks during the 2006 Commencement Ceremonies at Russell County High School in Russell Springs, Ky., on Friday, May 19, 2006. (AP Photo)