Israel seized a more than half a ton of TNT which an Egyptian boat tried to transfer to two Palestinian boats from Gaza last week. 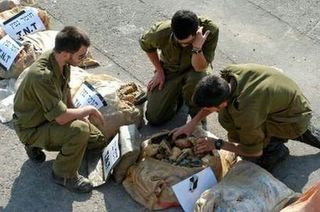 Israeli soldiers look into bags containing 550 kilograms (1212 pounds) of TNT explosives at a navy military port in the coastal Israeli city of Ashdod May 9, 2006. Israel thwarted an attempt by Palestinians to smuggle explosives to the Gaza Strip by sea from neighbouring Egypt last week, the military said. (REUTERS/Avi Rocach)

Nine Palestinians were hurt including five children on the way to school today in Gaza:

Nine Palestinians, including five children on their way to school, were wounded in a gunfight in Gaza City. Each side blamed the other for triggering it.

“We call everyone to resort to calm and rule of law and turn clashes to dialogue,” Hamas’ political leader Khaled Mashaal and Fatah official Farouk Kaddoumi, meeting Tuesday in the Syrian capital, said in a joint statement. “If strife occurs the Zionist Entity will be the only beneficiary.” 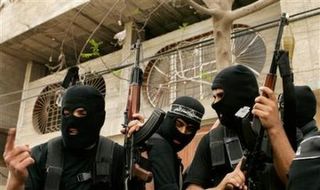 Palestinian gunmen from the Fatah movement take position during clashes with Hamas gunmen in Gaza May 9, 2006. (Mohammed Salem/Reuters)

Also, LGF is reporting that an Al Qaeda offshoot group has found a home in Gaza:

In leaflets telefaxed to reporters and pasted on street corners in Gaza City, the ‘al-Quds (Jerusalem) Islamic Army’ said that, like its parent organization, it would target ‘the crusaders and every enemy of Islam and Muslims and their collaborators.’

‘We will blow up our bodies in their positions’ and ‘strike with an iron fist at all the crusader, American and Zionist campaigns,’ said the statement, adding the group adhered to the principles of al-Qaeda leaders Sheikh Osama Bin Laden, Ayman al-Zawahri and Musab al-Zarqawi.

But, please don’t worry. The militant groups have agreed to stop the violence… for a few weeks… days… hours.