Sadly, Darth Vader was unable to persuade Halliburton officials to change their wicked ways at their annual shareholder’s meeting. 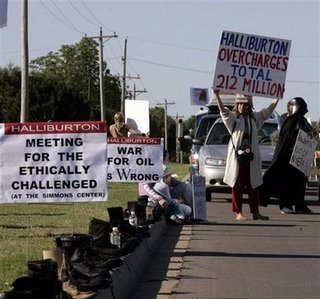 More than a dozen people were arrested this morning outside the shareholder’s meeting of the Houston-based company. (AP Photo)

Not even the Sisters of Mount St. Scholastica could crack the Halliburton nut. 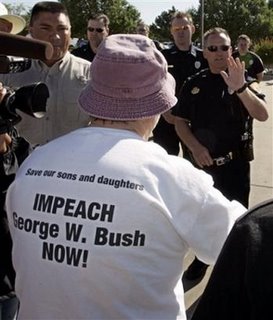 Hiram Myers, of Edmond, Okla., left, is warned to return to the protestors area or face arrest, during a protest outside the site of the annual Halliburton shareholders meeting in Duncan, Okla., Wednesday, May 17, 2006. More than a dozen people were arrested Wednesday outside the shareholder’s meeting of the Houston-based business. (AP Photo)

Halliburton officials refused to meet with anti-war, anti-Bush, anti-capitalist, protesters today at their annual board meeting. Even the Sisters of Mount St. Scholastica were shunned by the executives:

Halliburton Chairman and CEO David Lesar said he respected the protesters’ First Amendment right to speak out against the company even though he disagrees with virtually everything they say.

At the meeting, the Benedictine Sisters of Mount St. Scholastica in Kansas, along with several other Catholic groups, brought forward a shareholder proposal that Halliburton introduce a human rights policy to its Code of Business Conduct. That proposal was roundly defeated.

Mike Pechar reports that we can now identify 16 people responsible for Mexicans sneaking across the border.