Hello Operator… Get me Denny Hastert! 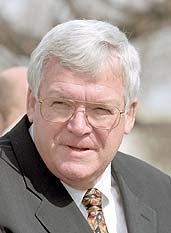 Gunshots or no gunshots! We need to put a stop to this FBI investigative madness!

Police are investigating after reports of gunfire was heard coming from a parking lot at a US House office building this morning:

Capitol police were investigating “the sound of gunfire in the garage level of the Rayburn House Office Building,” said an announcement on the internal Capitol voice alarm system.

The Senate was in session at the time, but the House was not. Four ambulances were summoned. The FBI said there have been no injuries reported thus far.

Rep. Peter Hoekstra (news, bio, voting record), R-Mich., conducting a House Intelligence Committee hearing, interrupted a witness to request those attending the meeting to remain in the room and said the doors must be closed.

“It’s a little unsettling to get a Blackberry message put in front of you that says there’s gunfire in the building,” he said.

But, wait!… Is this investigation lawful? Who do the police think they are, coming into the House Office Building and snooping around? Don’t think that you can intimidate the members of this House! And, don’t you dare think you’re going to take anything out of here!

Someone call the president and demand that he freeze all investigative operations, immediately!

The Jawa Report has updates on the situation.
Nice Doggie is very concerned about the Constitutional separation of powers that is just being trampled on at this moment!
John Stephenson is also updating on the developments.
Dennis Hastert is getting mail.
The Real Ugly American has been following the story since it broke this morning.
Glenn Reynolds has more thoughts today on the scope of Congressional Immunity.

Cox and Forkum… “A Royal Pain!”