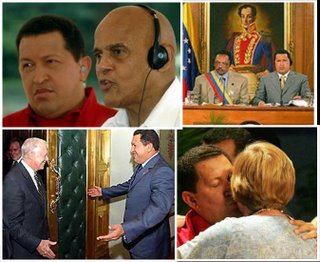 As predicted back in December, Hugo Chavez on Saturday made it official that he plans on ruling Venezuela for the next 25 years and with the Venezuelan Parliament and judges now completely under his control, despite the will of the people, there is nothing stopping him:

President Hugo Chavez said Saturday that Venezuelan voters should have the chance to decide whether he should govern the country for the next 25 years.

Speaking at a stadium packed with supporters in central Lara state, Chavez said he would hold a referendum to put the question of his remaining in office to Venezuelans if the opposition pulls out of upcoming presidential elections.

“I am going to ask you, all the people, if you agree with Chavez being president until 2031,” he said.

An earlier scene at a Chavez rally in November. 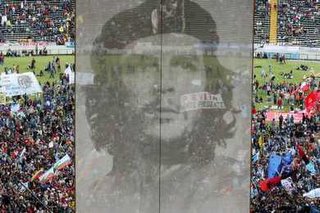 Thousands of Marxist demonstrators are seen through a giant Che Guevarra banner at Mar del Plata’s soccer stadium as they gather for a rally after demonstrating through the streets of the city as the Summit of the Americas opens November 4, 2005.

The stench of Marxism grows stronger by the day south of the border.

Hugo also announced plans on forming an “Axis of Good” to oppose America this weekend.
(Where Good = Marxism)