But with interest rates rising, the dollar falling and the budget deficit stuck at around $300 billion, tax experts warn that the tax code Bush has transformed may not survive to its Dec. 31, 2010, expiration date and that Congress may have to step in again because tax revenue will not meet all of the government’s needs. “We have a train wreck waiting to happen,” said C. Clint Stretch, director of tax policy at the accounting giant Deloitte & Touche.

Even some of the tax cuts’ strongest supporters concede that the tax code as written could not generate sufficient revenue to support the retirement programs during the coming crush of baby boomers.

Could they possibly be any more negative about a booming economy?

They obviously missed the news this week that the government just recorded the second highest month of tax revenue in history in April. 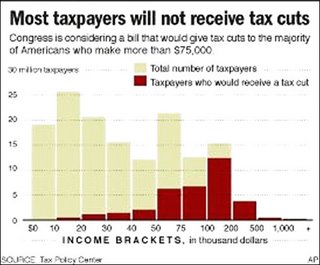 Those nasty Republicans! How could they not give a tax break to those who pay none?
The Washington Post makes it look like the lower income households in the US will not get a tax break from the tax cuts that were just extended until 2010.

What they don’t tell you is that most all of these households don’t pay income taxes already…
Ergo, no tax cut!

Here is another more honest look at the tax payers (via Instapundit): 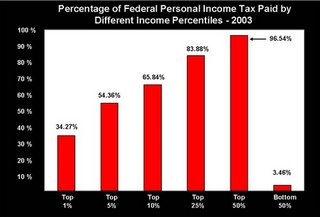 The Wall Street Journal reported in January, 2003 on this:

In 1999, there were 127 million tax filers, 94.5 million of whom showed an income tax liability. That is, 26% had no liability at all. The actual number of people filing without paying comes to 16 million (after subtracting those getting earned income tax credits and thus, presumably, still somewhat sensitive to tax rates). So almost 13% of all workers have no tax liability and so are indifferent to income tax rates. And that doesn’t include another 16.5 million who have some income but don’t file at all.

From Tax the Poor:

There are now more than 16 million Americans who file tax returns but pay no taxes. And that’s not because we’re getting poorer. America is getting richer. Fewer people are paying taxes because more and more politicians are succumbing to class warfare, and granting more and more exemptions to an increasingly complex tax code.

** Flopping Aces has much more on how the Bush tax cuts are benefitting the poor.

** The Skeptical Optimist figures that if the current trend continues, the budget will be ballanced on April 8, 2008! Wow!

Here’s more information the Washington Post should pick up on sometime:

The stock market has recovered from its implosion in Bill Clinton’s last year in office, unemployment is down to 4.7%, and growth has averaged 3.9% in the three years since those tax cuts passed – well above the post World War II average and more than twice the growth rate in Euroland. 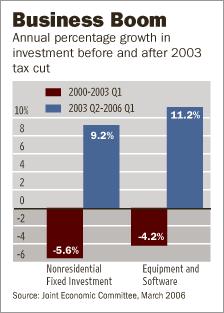 The tax payments of the wealthiest 3% of Americans increased at twice the rate of the tax payments by everyone else from 2001-2004. And those richest 3% now pay nearly as much income taxes as the other 97% combined. While the incomes of the rich have risen, the lower 2003 tax rates are still soaking them for the government’s benefit. (Washington Times)