Egyptian Sandmonkey, who is doing a terrific job following the story of the jailed Egyptian blogger Alaa, sends word that a blog was just set up called Free Alaa to draw attention to the plight of this young man. 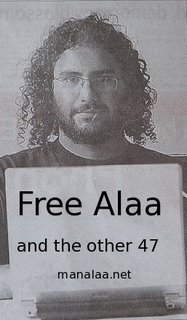 Egyptian Blogger Alaa Abdel Fatah has been arrested alongside 10 others while demonstrating in support of the independence of the Judiciary in Egypt and the release of previous demonstrators who were detained 2 weeks earlier. The Police entrapped them, cordoning off their peaceful protest and then proceeded to handpick the demonstrators that they wanted to detain, beat them, and then arrested them.

Alaa and those arrested with him are now arrested for 15 days “pending investigation”, which could be renewed indefinitely if the state so wishes. He and the men were sent to the infamous Torah Prison and the girls to the Qanatir prison for the duration. This makes them hardly safe, because stuff that goes on in Egyptian prisons on the hands of the jailors: beatings, sexual assaults, torture of all kinds.

Free Alaa has the contacts of those to write to or call to help out this fellow blogger in Egypt.