Don’t expect to see any plucked eyebrows from this bunch! 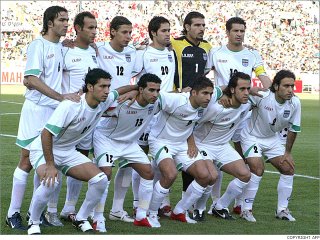 Or Does It Explode has news on the latest Iranian sporting uproar. Not only is the mullacracy banning women from attending the games, but the Iranian Phys Ed Organizer is now banning girly men from play:

Iran’s hardline Islamic regime has had enough of footballers with long hair and plucked eyebrows.

“I will ban athletes with an effeminate look,” the head of the country’s Physical Education Organisation, Mohammad Ali-Abadi said, told the Etemad-Melli newspaper.

“It is really disgraceful for Iran that young people step onto fields wearing make-up,” the top official fumed. “When a man enters the field with dyed hair and groomed eyebrows he is disrespecting society.”

The paper said Ali-Abadi appeared to be particularly worried about footballers, and warned that “even though they get away with it now, they will be disqualified in future”. 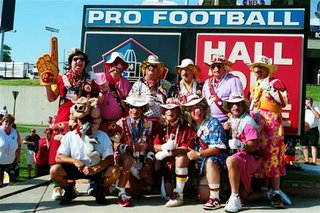 Maybe the Hogettes shoud be contacted!

In response, soccer fans at the 2006 World Cup tournament in Germany have started a movement to cross dress at all of the Iranian World Cup games:

We’re all in favor of anything that prevents plucked eyebrows from becoming a fashion trend in which we have to participate, but this just seems downright ridiculous.

To show our support for the women of Iran and for men everywhere who sport the effeminate look, we are going to follow the suggestion of blog reader Greg and we will wear wigs and dresses to Iran’s World Cup matches. Heck, we were going to bring them to Germany anyway, we might as well put them to good use during the games.

Imagine the shock it would cause Iran’s hardliners if they saw television images of 40,000 crossdressers watching their team play!

The hogettes may not be such a good idea after all. There seems to be sensitiviety surrounding pork.