It is about the readiness of a multi-ethnic nation to explode…
Wake up and smell the gunpowder! Revolutions don’t wait for calendar dates. 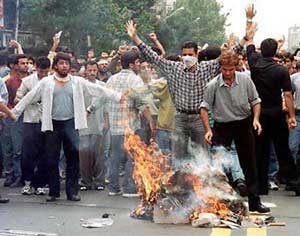 “These brave souls have the blood of Cyrus and the characteristics of Rostam upon their faces. In any other totalitarian regime this would end in “Rose Revolution” or an “Orange Revolution” the barbaric Islamic Republic knows no boundaries and knows no shame. Our prayers are with the students and their families. -Joseph 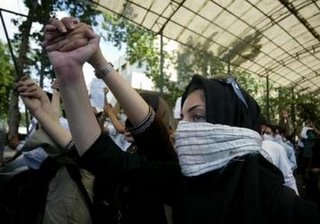 Iranian Woman writes “Wake up and smell the gun powder!”

It is not about the ribbon in Amir Taheri’s article or the tasteless humor in Mana Neyestani’s cartoon. It is about the readiness of a multi-ethnic nation to explode.

Wake up and smell the gunpowder. Revolutions don’t wait for calendar dates. Many times they happen over seemingly unimportant things.

An attempt by the Romanian government to evict a dissident Hungarian Reformed pastor led to fall of Ceauşescu’s regime. Probably few Romanians knew about the existence of the pastor before he became part of that nation’s history.

The Islamic revolution started from an article in the daily Ettela’at. It is time for students, workers, and minorities to rise up in a coordinated fashion. The mullahs will find it increasingly difficult to continue their rule. The mullahs know it and are therefore scared to death. That’s one of the reasons why they are literally begging to talk to the Americans. The idiots think that the Americans are planting the seeds of the revolt or that talking to the Americans will demoralize the people.

They are wrong. The mullahs’ rule has expired because the mullahs don’t belong to this age. They belong to an age when stoning, mutilation, and blinding were considered norm.

A coordinated move will bring down the regime. What is the opposition doing these days?

S’Can-Iranic reports that the mullacracy has imposed a news blackout on the Tehran university protests. 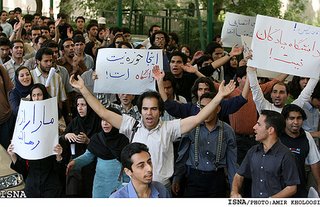 Middle sign reads: This is not a seminary, it is a university.
Sign in red, on the right reads: Mr. University Dean, this is a university and not an army barrack. (Regime Change Iran)

Meanwhile in the provinces…

One of President Mahmoud Ahmadinejad’s election promises was that he would visit all 30 Iranian provinces within his first year. Sadly, with rapidly escalating ethnic tension throughout the coountry this will be impossible for Ahmadinejad.

** Aryamehr has video not seen in the mainstream news of a union leader speaking up against the Iranian Regime in the Tabriz protests.**
Hat Tip Papa Ray 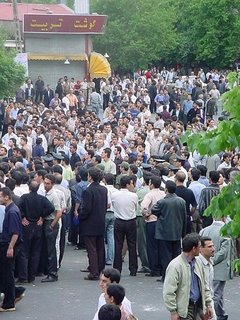 Protesters hurled stones and torched buildings in violent demonstrations from a 100,000-strong anti-government protest in the north-western city of Tabriz on Monday.
(Iran Focus)

Azeri-Press Information Agency reported on the violent protests on Wednesday:

The Southern Azerbaijan National Revival Movement (SANRM) bureau in Baku told APA that before the clash with Iranian police, the demonstrators, who were protesting against the caricature published by the newspaper “Iran”, burnt the newspaper bureau in Urmiya. Eastern Azerbaijan governor called on the protesters to calm down. But they attacked the Urmiya TV and Radio Company in Kashani Avenue. Special forces and police forces trying to disperse the demonstrators fired at. Some demonstrators are reported to have been injured and some killed. Special troops managed to disperse the protesters in Marand city. Police forces beat the protesters in Abrasan square in Tabriz.

The regime is also clamping down on religious minorities. 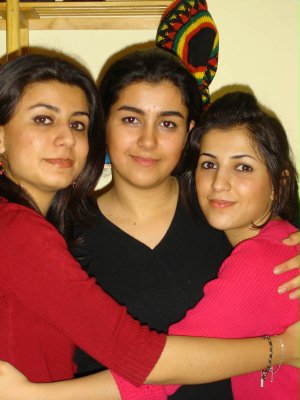 54 Baha ‘is were arrested and detained earlier this week in the city of Shiraz, (central) Iran. The random arrests by the regime has kept the religious minority off balance and in fear:

The arrests come against a backdrop of increasing concern by international human rights monitors that the Iranian Government is escalating its 25-year-long campaign of persecution against the 300,000-member Baha’i community of Iran, the largest religious minority in that country.

In March, the UN Special Rapporteur of the Commission on Human Rights on freedom of religion or belief released news of a secret 29 October 2005 letter from the Iranian military high command ordering police and Revolutionary Guard units to “identify” and “monitor” members of the Baha’i community of Iran, saying the existence of such a letter made her “highly concerned.”

The real no-go area for Ahmadinejad, however, is the southeastern province of Sistan and Balochistan, a vast region of mountains and deserts bordering Pakistan and Afghanistan. 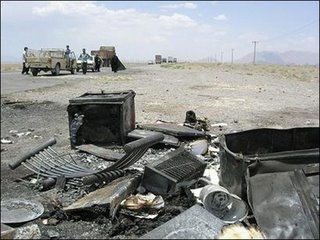 Remains of burnt cars are seen next to the Bam-Kerman road where twelve Iranians were shot in cold blood on the side of a highway in Iran, on May 14. Iranian officials retaliated by killing 4 Sunnis in the area. (A
FP)

On Thursday, May 25, Aryamehr reported that a military campaign is ongoing in Sistan and Baloochistan Province:

The Islamic Republic has intensified its military campaign in Sistan and Baloochistan Province of Iran agains the oppressed Balooch people of this region, who in recent weeks have increased their resistance against the Islamic Republic (Note: they are not seperatist).

Military jets and helicopter gunships have been put into operation and several deaths have been reported. The Islamic Republic says the military campaign is to roots out drug-traffickers which is a common cover the Islamic Regime uses to oppress freedom fighting people. Below are some pictures from the region of the Islamic Republic’s loyal Islamist Basij and Revulutionary Guards forces. These Islamist forces first of all do not look Iranian and are most likely foreign merceneries that the Islamic Republic is known to use when suppressing Iranians. In the past Iranian soldiers have disobeyed orders to harm their own brethren and sisters, especially in demonstrations. The Regime has therefore imported arab and other foreign merceneries to do the dirty job for them.

Military operation by the Islamic Republic occupying Iran against the oppressed Balooch people in south-eastern Iran; this operation started last week and is still ongoing.

Quite a few provinces have become no-go areas for the president. The reason is increasing ethnic and sectarian tensions in parts of the country.

There is also tension in the province of Kurdistan, on the border with Iraq, and the Kurdish-majority districts of West Azerbaijan.

Some Kurdish opposition groups, including an outfit known as Pejak and an older Communist group known as Komaleh have already embarked on a guerrilla campaign against the Islamic regime. Both groups maintain bases inside the autonomous Kurdish region of Iraq, and are believed to have ties with the Kurdish Workers Party (PKK), a guerrilla movement fighting Turkey.

However, what worries Tehran most is the rising tide of protest by unarmed populations in some Kurdish cities.

During the past six months at least 30 people have been killed by the security forces during anti-regime demonstrations in various Kurdish cities.

President Ahmadinejad is unable to visit any of the three provinces where ethnic Kurds form either a majority or a substantial segment of the population.

Another province that faces increasing unrest is Khuzestan that produces almost 80 percent of Iran’s oil. The province is home to most of Iran’s estimated 3.2 million ethnic Arabs. Although ethnic Arabs account for fewer than 40 percent of the province’s population, there are districts, such as Dasht Mishan and Susangerd, where they represent up to 80 percent.

Here, too, ethnic and linguistic grievances, combined with dissatisfaction with Tehran’s economic and social policies, have created an explosive situation, which the authorities have tried to control by force. Over the past six months at least 18 people have been killed by security forces and hundreds injured. Khuzestani opposition groups claim that over 400 people have been abducted by government forces and taken to unknown destinations.

Iran is blaming the violence on the US and Great Britain…