The Minority House Leader joined her Anti-war Hawk in waging vile attacks against the US military today.

And with this bold and irresponsible leadership move, the party of Kerry and Kennedy and Conyers and Kucinich turns back toward its natural state of being.

Republicans can keep the 4th of July…
May 18, 2006 is Democratic Freedom Day!

* No more do liberals need to hide their party affiliation when attacking military recruiters.
* No more urging party members to shut their cakeholes.
* No more worries about hurting troop morale
* No more squishy excuses for turning down retired battleships
* No more apologizing for coddling the enemy
* No more hiding from Mother moonbat!

Nancy Pelosi, interviewed today, says she backs the attacks against our military by her democratic colleague, John Murtha.

Nancy and John agree that they believe the word of Anti-American activists over the word of innocent United States Marines… How sick and pathetic. 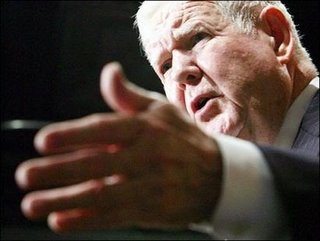 S Rep. John Murtha, D-PA, speaks during a news conference on Capitol Hill in Washington, DC. Murtha, a former Marine colonel, accused US Marines of killing innocent Iraqi civilians after a Marine comrade had been killed by a roadside bomb.(AFP/Getty Images/Win McNamee)

RedState explains how this loudmouth “Antiwar Hawk”, may soon be an ex-marine, quick-like!

James Taranto in the Opinion Journal today talks about Murtha’s ridiculous and preposterous claims against our men in uniform:

What happened in Haditha we know not, but we can tell you that Murtha’s description is false, for the simple reason that it is self-contradictory. If the Marines “overreacted,” then the killings were not premeditated. They could not have killed both in the heat of the moment and in cold blood. Murtha therefore either is slandering the Marines by exaggerating their guilt or making excuses for horrific war crimes.

Why would he do such a thing? The key is that phrase “because of the pressure on them.” They’re depraved on account of they’re deployed: Murtha seeks to maximize the evil of the alleged crimes while simultaneously deflecting blame from the actual perpetrators to those who have applied “pressure” to them–i.e., civilian leaders in the executive branch.

Sound familiar? This was just what John Kerry did back in 1971, when he told tales (many of them false) of war crimes in Vietnam…

John O’Neill from the Swiftvets and POW’s for Truth tonight on Hannity & Colmes also compared Murtha’s despicible attacks to Kerry’s attacks on the military 30 years ago.