Rep. Debbie Wasserman Schultz (D-FL) gave a mean-spirited ‘comedy routine’ in the US House blaming Republicans for gas prices being $3.00 per gallon in the United States… Then she voted against US oil development that same day.

On Thursday May 25, the video of this speech was posted on YouTube.com under user name “Nancy Pelosi” – Democratic Leader of the U.S. House of Representatives.
The speech is so over the top (and unfunny) that you have to see it to believe it.

Here is that Video. 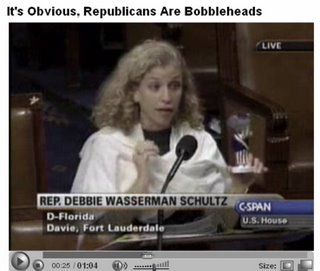 Here is part of the “bobblehead” speech by Wasserman Schultz:

Rep. Debbie Wasserman Schultz(D-FL) has reached the conclusion that “Americans will consistently have to pay $3.00 a gallon for gas. Republicans don’t have the joints that they need on the side of their neck to say no. Apparently they only know how to say, yes, Mr. Speaker, yes, Mr. President, yes, CEO of oil company, I’m happy to do your bidding and whatever it is that you like.”

Well, she thought it was funny, anyway. Then…

With this vote on May 25, the House approved drilling in ANWR and the Republican members approved putting Americans to work producing our own energy. Once again Wasserman Schultz, Pelosi and rest of the liberal democrats voted against it:

The reality of the bill being enacted still weighs in the balance, however, as proponents in the Senate have been unsuccessful in their attempts to reach the 60 votes necessary in order to bypass a filibuster.

“Once again, the House has voted to put Americans to work producing more of our own energy,” said author of the current bill, House Resources Committee Chairman Richard W. Pombo (R-CA). “And, once again, liberals defied the common-sense principle of supply and demand by voting no. That’s a great way to keep prices on the rise.” Pombo’s bill, “The American-Made Energy and Good Jobs Act,” would add 10.4 billion barrels to the nation’s oil reserves.

But, this joke is nothing new for democrats or Wasserman Schultz.

Just ONE WEEK earlier democrats voted on Thursday May 18, 2006 to block US companies from drilling off the coastal United States! 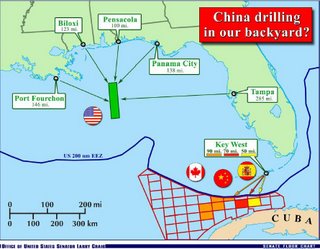 This was despite the fact that Castro announced last week that Cuba had stepped up work on 36 new oil wells in partnership with Chinese, among others, off the coast of Florida. So, instead of allowing the most environmentally responsible companies to operate there and increase our domestic supply, China, who has a dismal environmental record, is sucking close, lucrative oil reserves dry!

When the Chinese oil spills come splashing up on the Florida beaches and drivers are paying $4.00 a gallon for gas… they won’t be laughing at Wasserman Schultz and the democrat’s energy jokes!

Previously:
Thanks to Democratic “No Zones”, the US Is in Grave Danger
It’s Official, Cuba Hires China to Drill Oil Off Florida Coast
Despite Oil Crisis, Democrats AGAIN Block US Firms from Drilling!