Poor Cindy… Canadian officials did not bow to her twaddle. 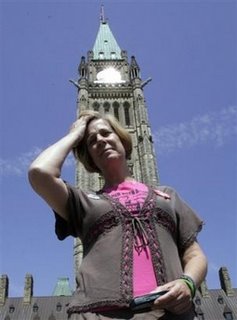 Cindy Sheehan, anti-war activist and mother of a U.S. soldier who was killed in Iraq, stands on Parliament Hill after holding a news conference in Ottawa, Thursday, May 4, 2006. Sheehan joins the War Resisters Support Campaign and the Council of Canadians in demanding that the federal government of Canada make a provision allowing U.S. soldiers resisting war in Iraq to be granted sanctuary in Canada. (AP PHOTO/CP, Fred Chartrand)

Our Conservative friends at the Western Standard in Canada are cheering Immigration Minister Monte Solberg’s comments on Cindy Sheehan’s meddling with Canadian policy:

His [Jack Layton’s] comments followed an Ottawa visit by Cindy Sheehan, who has become an outspoken anti-war campaigner after the death of her son Casey in Iraq. She used a Parliament Hill news conference yesterday to urge Canada to offer sanctuary to U.S. deserters.

When Casey expressed his misgivings about fighting in Iraq before his deployment, Sheehan offered to drive him to Canada. He was in Iraq five days before being killed in April 2004.

Responding to Sheehan’s pitch yesterday, Immigration Minister Monte Solberg told reporters: “If Mrs. Sheehan has a bone to pick with the U.S. administration about the war in Iraq she should take that to Washington. It’ll be Canadians who decide Canadian immigration policy.”

It looks like there are a few Canucks appreciative of Monte Solberg.