“You know, the amazing thing about dealing with Prime Minister Blair is never once has he said to me on the phone, we better change our tactics because of the political opinion polls. And I appreciate that steadfast leadership.” 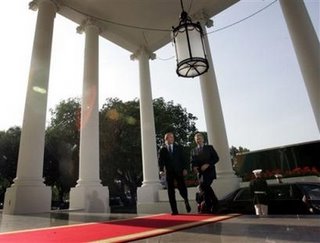 George Bush took some swipes at the United Nations. From the White House …

PRESIDENT BUSH: I’d like to see a United Nations that’s effective, one that joins us in trying to rid the world of tyranny, one that is willing to advance human rights and human dignity at its core, one that’s an unabashed organization — is unabashed in their desire to spread freedom. That’s what I’d like to see, because I believe that freedom will yield to peace.

I also believe freedom is universal. I don’t believe freedom is just a concept only for America or Great Britain. It’s a universal concept. And it troubles me to know that there are people locked in tyrannical societies that suffer. And the United Nations ought to be clear about its desire to liberate people from the clutches of tyranny. That’s what the United Nations ought to be doing, as far as I’m concerned.

President Bush also pointed out the progress that is often overlooked by the American media:

PRESIDENT BUSH: No question that the Iraq war has created a sense of consternation here in America. I mean, when you turn on your TV screen and see innocent people die, day in and day out, it affects the mentality of our country.

Part of progress, of course, is on the political track. You know, we had elections in Iraq; 12 million people voted last December. Now, it seems like an eternity ago, I know, like a decade. But that’s not all that long ago in the larger scope of things. Twelve million people said, we want to be free. It was an astounding moment. And this unity government is now formed, as a result of those elections, under a constitution approved by the Iraqi people. That’s progress. It’s certainly a far sight from the days of a tyrant who killed hundreds of thousands of his own people and used weapons of mass destruction and threatened the neighborhood. I mean, that is progress. 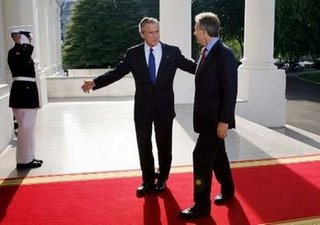 U.S. President George W. Bush welcomes British Prime Minister Tony Blair (R) to the White House in Washington May 25, 2006. Bush and Blair were unlikely to set a timetable to withdraw troops from Iraq when they meet at the White House on Thursday to discuss the next steps in bringing order to the country, the White House said. (REUTERS/Kevin Lamarque)

Prime Minister Blair who looked noticeably worn, reaffirmed his commitment to to assist Iraq in its democratic transformation:

PRIME MINISTER BLAIR: I don’t really think it’s a matter of our vindication. I think, in a way, that’s the least important part of it. But I do think that occasionally we should just take a step back and ask, why are we doing this? Why is it so important?

…And the problem we have is very, very simple. A large part of the perspective with which we look at this is to see every act of terrorism in Iraq, every piece of ghastly carnage on our television screens, every tragic loss of our own forces — we see that as a setback and as a failure when we should be seeing that as a renewed urgency for us to rise to the challenge of defeating these people who are committing this carnage. Because over these past three years, at every stage, the reason they have been fighting is not, as we can see, because Iraqi people don’t believe in democracy, Iraqi people don’t want liberty. It is precisely because they fear Iraqi people do want democracy, Iraqi people do want liberty.

And if the idea became implanted in the minds of people in the Arab and Muslim world that democracy was as much their right as our right, where do these terrorists go? What do they do? How do they recruit? How do they say, America is the evil Satan? How do they say the purpose of the West is to spoil your lands, wreck your religion, take your wealth? How can they say that? They can’t say that.

So these people who are fighting us there know what is at stake. The question is, do we?

The AP emphasizes “setbacks” in its coverage of the press conference.
MacsMind says it was a homerun.
TigerHawk says the Left is in denial.
Sister Toldjah says the Left can be sick and twisted, too.