But, get this… the new members have one year to clean up their act… or… or else! 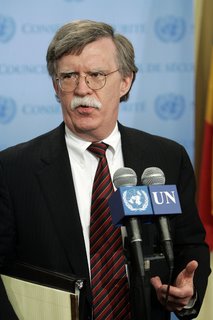 US Ambassador John R. Bolton speaks with reporters yesterday during activity at the United Nations. The US opted out of the reorganized Human Rights Council claiming not enough was done to prevent abusive countries from becoming members. (UN)

Despite attempts by the world media to postulate that the the “revamped’ UN Human Rights Council is better than its discredited predecessor, the line up is essentially the same. The same old dictatorships are represented, but this time without the US, who decided not to play along:

“We are looking at a very different selection pool than we traditionally did for the commission, and that’s a big step forward,” said Kenneth Roth, executive director of Human Rights Watch. “Inevitably, there will be some governments on the new council who shouldn’t be there.”

But he said it was telling that some recent members of the previous rights commission “have not even dared to seek membership on the new council.” They include Sudan, Zimbabwe, Libya, Congo, Syria, Vietnam, Nepal, Sri Lanka, Eritrea and Ethiopia, he said.

Umm… Sri Lanka is still on the Council.

Syria, Vietnam, and Libya were not members of the Council when it was disbanded.

And, despite the nauseating hubris from such noted “human rights” groups like Amnesty International or Human Rights Watch who are currently attacking the US at the UN Torture Court, the representatives today still managed to vote in communist regimes and brutal dictatorships.

Here is a comparison of the council members before the reorganization and after:

Nations Represented on the previous UN Human Rights Council in 2005:

The description after each nation is from the Freedom House Annual Global Survey of Political Rights and Civil Liberties.

11 from Latin American and Caribbean States:

10 from Western European & Other States:

Here are the member nations that were selected in two rounds of voting Tuesday for the revamped United Nations Human Rights Council:

As you can see. There is not much change in the council. And, there’s not much to jump up and down about, despite what Jimmy Carter says and does.

Michelle Malkin has a big roundup of blogger reaction to this appalling news.
Publius Pundit has an especcially good review of the insanity.
Val‘s head is spinning.
Wizbang has Cuba’s reaction to the news. Unreal!
Fausta has more on this bad joke.
John Stephenson has more on the serious matters occupying the UN’s time lately.