At 2:00 AM in a Small Missouri Town, Hundreds Wait for a Hero

At 2:00 AM on a Monday night, Jamestown, Missouri waited up to honor an American hero. 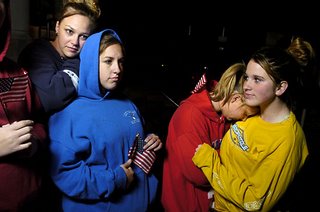 Left, Jackie Price, Katy Nivens, Stacia Wolfe and Amy Ashley all former schoolmates of Leon Deraps at Jamestown School wait at about 1:00 a.m. last night for a procession carrying the body of Deraps to pass by Jamestown on Highway 179. (Columbia Tribune) 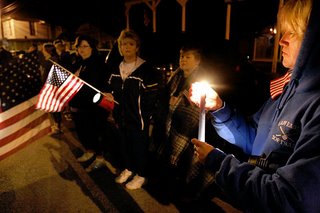 Mourners hold vigil along the procession route in downtown Jamestown early Tuesday morning while waiting for the procession of Lance Corporal Leon Deraps, which passed through just before 2AM. The route was lined with signs, candles, flags and friends as he was brought through town on the way to a funeral home in California, Missouri. (Columbia Tribune) 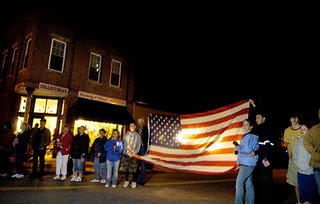 Townspeople wait on Highway 179 in Jamestown moments before a procession carrying the body of local marine Lance Corporal Leon Deraps drives through town on its way to a funeral home in California at about 1:50 a.m. last night. (Columbia Tribune)

California, Missouri is a quaint town of 4000 people located in the middle of Missouri.

Young Leon Deraps from the California area, signed up for the Marines when he was 17 and in high school despite the fact that his grandfather and namesake Leon “Bud” Deraps is an active anti-war activist.

The elder Deraps regularly holds counter-recruitment protests at schools and colleges, focusing on the physical and emotional impact of the war on American troops…

Last night hundreds of friends, family and supporters from the California community met at 2:00 AM to welcome their local hero, Marine Lance Cpl. Leon Deraps, back home from Iraq. 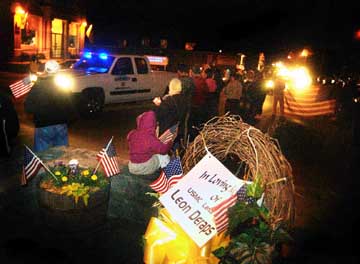 Flags, luminaries, candles and flashlights greeted the body of Marine Lance Cpl. Leon Deraps early Tuesday morning as he was escorted through Jamestown and California. 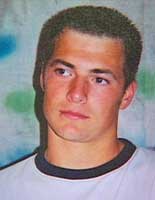 Deraps, 19, was killed on May 6 while conducting combat operations with the 7th Engineer Support Battalion, 1st Marine Logistics Group, in the al-Anbar Province of Iraq.

Despite the early morning hours, several hundred people gathered in Jamestown to greet their fallen hero with waving flags and tear-streamed faces.

The 12-mile stretch of Highway 87 between Jamestown and California was lined with flags and luminaries and nearly every driveway played host to at least one person as the procession traveled through at minimal speed.

Deraps’ body was greeted by several family members and by the Jefferson City Marine Corp. League at Bowlin-Cantriel Funeral Home in California. 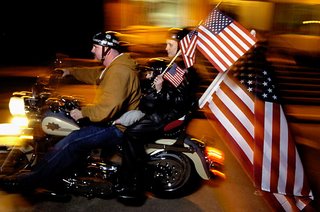 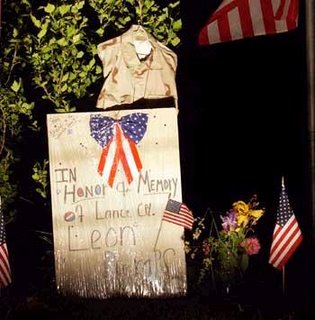 A memorial in honor of Lance Cpl. Leon Deraps is lit up early Tuesday morning in the front yard of a residence on Row Street in Jamestown. (Chris Young/News Tribune photo) 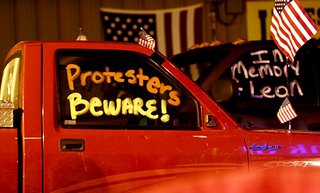 Friends of Lance Corporal Leon Deraps painted their trucks up with memorial messages and warnings to potential funeral protestors in Jamestown on Monday night as they waited for the hearse carrying Deraps to pass through town on the way to a funeral home in California, Missouri. (Columbia Tribune)

The Ethical Society of Missouri Blog pays a tribute to Leon’s grandfather and his antiwar work.