“People have the right to protest, but I hope when they protest they realize also that people now have a right to protest in Baghdad and Kabul, and that’s a very big breakthrough for the international community.”

Let’s hope this wasn’t one of Mathematics instructors holding up the sign. If there are 35,000 fatalities (primarily by terrorists) from this War in Iraq, then that is a significant reduction from the torture and slaughter Iraqis endured under Saddam Hussein. 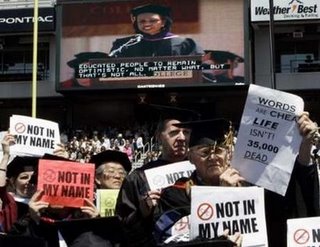 It’s too bad about that one Boston College professor who had to resign rather than sit and listen to the speech by Condi, especially since most of the people at the Commencement Ceremony were elated to have Condoleezza Rice, the most powerful woman in the world, speak at the schools commencement services:

Secretary of State Condoleezza Rice was greeted with a polite protest that was quickly drowned out by a standing ovation Monday as she took the podium to speak at the Boston College commencement.

About 50 students stood with their backs toward the stage as Rice was introduced. They sat down by the time she began to speak, and about a half-dozen held up signs that said “Not in my name” with a crossed-out diploma — showing opposition to the honorary doctorate degree being bestowed on Rice.

A banner reading “BC honors lies and torture” was held up on the side of the stadium, away from where the students were sitting.

A few of the students refused to let go of their indoctrination. 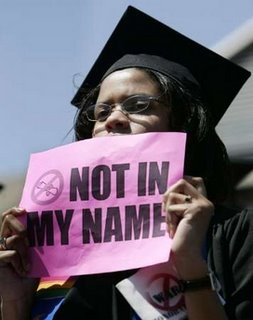