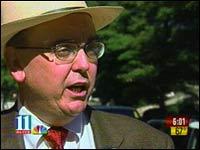 Larry Darby, a candidate for Alabama Attorney General, hoping to “reawaken white racial awareness” said earlier this month that the Holocaust did not happen:

Speaking in an interview with The Associated Press, Darby said he believes no more than 140,000 Jewish people died in Europe during World War II, and most of them succumbed to typhus.

Historians say about 6 mil lion Jews were slaughtered by the Nazis, but Darby said the figure is a false claim of the “Holocaust industry.”

“I am what the propagandists call a Holocaust denier, but I do not deny mass deaths that included some Jews,” Darby said. “There was no systematic extermination of Jews. There’s no evidence of that at all.”

But, the Democratic Party will keep Darby on the ballot in Alabama despite objections:

In a statement Friday, the party said Darby would remain on the ballot as a Democrat because there was no formal challenge against him within the timeframe set by its bylaws. Spearman declined to speculate about Lyon.

Now, Darby has company in the Big Tent Party…

Harry Lyon is running for Governor of Alabama as a Democrat and has a solution for illegal immigration:

Lyon said if elected, he would sponsor a law to get all illegal immigrants out of the state within 90 days, or be hanged in public.

“It would only take five or 10 getting killed and broadcast on CNN for it to send a clear message to not set foot in Alabama,” said Lyon, a Pelham lawyer. “Anybody that breaks into my home is a threat to my life. I remember the Alamo.”

Darby has a similar plan:

(On Lyon) “If he’s willing to have public hangings of Mexicans, that sounds like he’s the right man for the job,” Darby said.

“This man is not connected to reality,” Tyson said. “I think he’s a crackpot trying to get some publicity.”

In the Bullpen sees an old-time new-time Democrat.