Protesters massed in the streets of Jakarta on Friday to show their support for President Mahmoud Ahmadinejad and his attacks on Israel.

The Iranian president who is visiting the country this week for meetings, continued his attacks on Israel on Thursday saying,
“Israel is a regime based on evil.”. 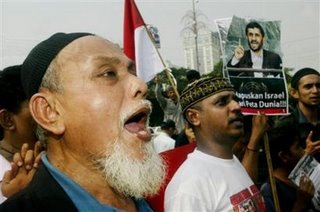 Indonesian man shouts slogans near a sign depicting Iranian President Mahmoud Ahmadinejad and reading ‘erase Israel from the world map’ at a demonstration of support for Iran in front of the U.S. Embassy Friday, May 12, 2006 in Jakarta, Indonesia. To a cheering audience Thursday at the University of Indonesia, he called Israel ‘a tyrannical regime that one day will be destroyed.’ Many students held up posters of support. One read ‘Iran in our Hearts.’ (AP Photo/Tatan Syuflana)

Meanwhile…
A democratic candidate in Alabama for attorney general also is airing his support of President Ahmadinejad. Larry Darby agrees with the Iranian leader that there was no Holocaust and that the story is just made up by the “Holocaust industry”:

A Democratic candidate for Alabama attorney general denies the Holocaust occurred and said Friday he will speak this weekend in New Jersey to a “pro-white” organization that is widely viewed as being racist.

Larry Darby concedes his views are radical, but he said they should help him win wide support among Alabama voters as he tries to “reawaken white racial awareness” with his campaign against Mobile County District Attorney John Tyson…

…Speaking in an interview with The Associated Press, Darby said he believes no more than 140,000 Jewish people died in Europe during World War II, and most of them succumbed to typhus.

Historians say about 6 million Jews were slaughtered by the Nazis, but Darby said the figure is a false claim of the “Holocaust industry.”

“I am what the propagandists call a Holocaust denier, but I do not deny mass deaths that included some Jews,” Darby said. “There was no systematic extermination of Jews. There’s no evidence of that at all.”

Darby said he will speak Saturday near Newark, N.J., at a meeting of National Vanguard, which bills itself as an advocate for the white race. Some of his campaign materials are posted on the group’s Internet site.

President Mahmoud Ahmadinejad said on Saturday that Iran is ready to hold talks with anyone but Israel.

Iranian officials also made clear this week that if “America does make any mischief, the first place we target will be Israel.”