Sadly, the young protesters had to dunk their heads in Puget Sound after their encounter with pepper spray. 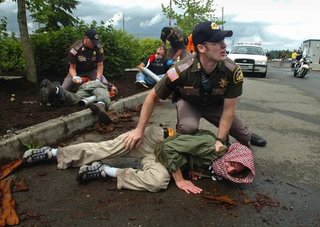 Thurston County Sheriff’s deputies holds protesters to the ground after clearing the entry to the Port of Olympia on Wednesday afternoon. (Tony Overman/The Olympian)

More often than not, a tug on the hair will subdue even a young moonbat protester. 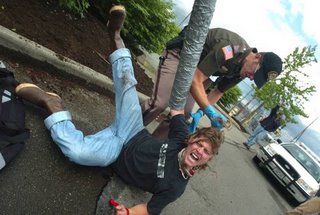 A protester is pulled to the ground by a Thurston County Sheriff’s deputy after a group tried to block the entry to the Port of Olympia on Wednesday afternoon. (Tony Overman/The Olympian)

The protesters were quite vocal and irritable with the authorities,
OLYMPIAN VIDEO HERE

Before the pepperspray the mob was unruly; afterwards… not so much. 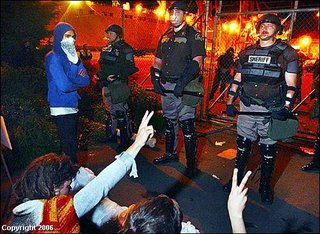 Thurston County Sheriff’s officers stand between protesters and the Port of Olympia fence after a crowd tried to tear the fence down Monday evening following the arrival of a large military ship bound for Iraq. (Olympian)

After trying to break open a fence at the Port of Olympia, police pepper sprayed anti-war youth protesters in Olympia last night:

Police fired pepper spray as about 150 anti-war protesters tried to enter the Port of Olympia as part of ongoing demonstrations against the shipment of Army equipment to Iraq.

Protesters chanted “Out of Olympia, Out of Iraq” as they rocked a chain-link gate to the port late Monday, and at least three tried to use wooden boards to pry the gate open, The Olympian newspaper reported. A 50-ton piece of equipment was moved to reinforce the gate on the other side.

Police and sheriff’s deputies clad in riot gear fired at least four rounds of pepper spray in an hour after asking the demonstrators several times to stop, authorities said. No one was arrested, but paramedics were dispatched to treat some activists.

Dozens of demonstrators crouched in the port plaza, dousing each other’s eyes with water and offering slices of onion to soothe their throats.

“It burned. I couldn’t open my eyes for 20 minutes,” said Rachel Graham, among those hit. “My face is burning. I dunked my face in water and in Puget Sound.”

I am guessing this angry protester holds the other half of the tin-foil goal post/road blocking arm bar? 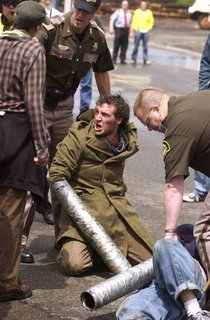 A protester argues with Thurston County Sheriff’s deputies after being pulled to the side of the road to clear entry to the Port of Olympia. (Tony Overman/The Olympian)

A peaceful human chain in the middle of the road one minute…
A jaunt to the county jail the next. 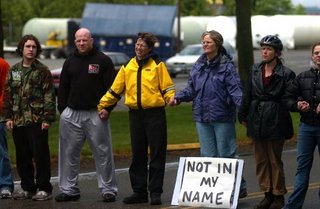 A line of Iraq war protesters block a Stryker Armored Vehicle convoy as it makes its way down Marine Dr to the Port of Olympia Wednesday afternoon. Refusing to move, a number of the group were arrested for blocking as the convoy. (Steve Bloom/The Olympian)

I’m not sure why, but “Cage Fight” keeps flashing through my mind. 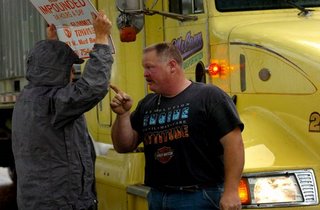 Shouting, “Don’t do that again” a truck driver hauling a military cargo container cautions one of approximatley 40 Iraq war protesters after the protester slammed his sign down on the driver’s semi fender. (Steve Bloom/The Olympian)

Sweetness and Light has more on this stunt.