Hundreds of protesters also showed up in Arizona for a rally urging lawmakers to secure America’s borders on May 3, 2006,
KCEN VIDEO HERE

Latino Americans for Immigration Reform organized a “Rumble at the Ranch” in Crawford, Texas on Saturday, calling for tighter border security and protesting amnesty for illegal immigrants. 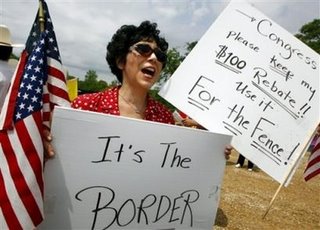 Around 500 people gathered outside the President Bush’s ranch in Crawford, Texas on Saturday protesting for tighter border security:

“Rumble is both a noise and a fight, and we’re in a fight to save our country,” said Frank Jorge of Latino Americans for Immigration Reform, which organized the “Rumble at the Ranch” event in a lot near the high school football field several miles from Bush’s ranch. “Hey America, are you ready to rumble?”

He and others called for Bush’s impeachment, saying the president has put politics and businesses’ greed above the rights and safety of American citizens.

A 76 year-old Grandma leads the Texans for Immigration Reform group that is pushing for tighter border security. 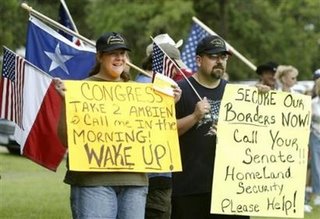 Rhonda Land, left, and her husband Michael Land, both of Alvarado, Texas, listen during a rally protesting amnesty for illegal immigrants Saturday, May 6, 2006, in Crawford, Texas. (AP Photo/Matt Slocum)

It is interesting how this protest drew less media attention than a book signing protest at Camp Casey in the fall.

Rasmussen Reports, the most accurate polling firm in predicting the outcome of the 2004 presidential election, continues to show that a large majority, 67%, of Americans favor an enforcement first policy in regards to immigration.