A Duke Lacrosse Player Speaks Out

A Duke Lacrosse player says no rape occurred and that it is not right that the rape case is being tried by the media,
VIDEO HERE

The Duke player also says he is afraid that another innocent Duke player may be indicted by District Attorney Mike Nifong! 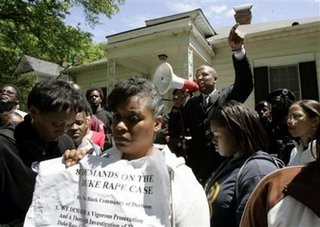 Malik Z. Shabazz, National Chairman of the New Black Panther Party, upper right, speaks outside 610 North Buchanan Boulevard Monday, May 1, 2006 in Durham, N.C. Malik and a small group from the New Black Panther Party gathered for a news conference to discuss the rape allegations against members of the Duke lacrosse team. The group gathered at the house where the woman says the rape occurred. (AP Photo/Gerry Broome)

ABC TV 11 out of Durham held the interview with the anonymous Lacross team player:

The player says Duke University officials turned their backs on the team.
“From the get-go, we’ve only had each other to fall back on,” he said. “We’ve been convicted in the media. Our university turned its back on us…They didn’t stand up for us. We feel neglected, and we feel that our loyalty to the university wasn’t reciprocated.”

He said the allegations have brought players closer together.

Coach ‘was forced out’
The team was on its way to the national championship when the rape investigation began and Coach Mike Pressler resigned. “He didn’t resign. He was forced out,” the player said. “The notion that he quit or resigned is ridiculous.”

Certain that rape didn’t happen
The player said he was 100-percent certain that a rape did not happen.
“From the beginning, it was rape and these guys did this and this definitely happened, but only now do you see that there are two sides of the story,” he said.

“I just pray [Nifong] doesn’t go through with it, that he doesn’t indict another innocent person,” the player said. “We’re all anxious, because even if it’s not me, it’s going to be somebody else, who I care about.”

The player is upset with the way District Attorney Mike Nifong has handled the investigation.

Earlier this week members of the Black Panthers Party visited Durham. In interviews the panthers said that they will not be be satisfied until the Duke players are prosecuted and found guilty and that if they don’t get “their justice” there will be no peace in the Durham community.