We know at least one person who Joe Wilson leaked to about his wife’s occupation.

And, it is safe to say that after the threats from Wilson’s attorney, he is probably not to keen on the former Ambassador! 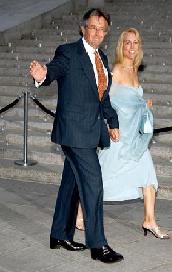 Byron York at The Corner (and later the AP) confirmed that Lewis “Scooter” Libby has five witnesses lined up who will testify that Joe Wilson outed his own wife:

The defense attorney said he has five witnesses who will testify that Wilson told them his wife worked for the CIA. The defense team believes such testimony will show that her status was well-known.

Fitzgerald said he will not offer proof that the outing of Plame damaged national security.

On Friday, Joe Wilson released a statement to CNN where he does not deny that he leaked his wife’s occupation:

BLITZER: And John, producer, Stephanie Katube (sp), just got a statement from Ambassador Joe Wilson. Let me read it to you and to our viewers. “The last I heard,” Wilson says, “this is case is about allegations Mr. Libby lied, perjured himself before the FBI, special prosecutor and grand jury and obstructed justice. None of those charges of which he’s been indicted has anything to do with me.”

Wilson goes on to say, “Furthermore, the government in the person of the special prosecutor in his court filings has made it clear it believes several White House officials were engaged in a campaign to, quote, `discredit, punish and seek revenge’ on me. It would appear that campaign is ongoing.”

Funny, the tender Joe Wilson reply today doesn’t have the same fire as the “fuming” Joe Wilson from last year when first confronted as being the leaker.

General Paul Vallely said last year that, “This whole thing has become the biggest non-story I know and all created by Joe Wilson.” 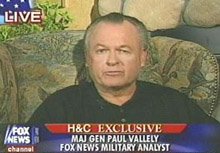 Vallely told WND that, according to his recollection, Wilson mentioned his wife’s job at the CIA in the spring of 2002 – more than a year before Robert Novak’s July 14, 2003, column identifying her, citing administration officials, as “an Agency operative on weapons of mass destruction”…

…Vallely said, citing CIA colleagues, that in addition to his conversations with Wilson, the ambassador was proud to introduce Plame at cocktail parties and other social events around Washington as his CIA wife.

“That was pretty common knowledge,” he said Friday. “She’s been out there on the Washington scene many years.”

If Plame were a covert agent at the time, Vallely said, “he would not have paraded her around as he did.”

Wilson “fumed” and had his lawyer send threatening emails to World Net Daily and Paul Vallely who later said:

Vallely told WND that, in his opinion, it became clear over the course of several conversations that Wilson had his own agenda, as the ambassador’s analysis of the war and its surrounding politics strayed from reality.

“He was a total self promoter,” said Vallely. “I don’t know if it was out of insecurity, to make him feel important, but he’s created so much turmoil, he needs to be investigated and put under oath.”

Well, there’s one witness for the defense!

At least two veteran reporters say Valerie Plame’s association with the CIA was widely known, and a prominent analyst on military and political affairs, Victor Davis Hanson, told WorldNetDaily his own green-room encounter with Wilson revealed a man who is unusually free with personal information to strangers.

Former Time magazine correspondent Hugh Sidey told the New York Sun in a story published in 2005. “[Plame’s] name was knocking around in the sub rosa world we live in for a long time.”

NBC reporter Andrea Mitchell, in an appearance on CNBC’s “Capitol Report,” Oct. 3, 2003, was asked how widely it was known in Washington that Wilson’s wife worked for the CIA.

“It was widely known among those of us who cover the intelligence community and who were actively engaged in trying to track down who among the foreign service community was the envoy to Niger,” she said.