The Jordanian mass-murdering devil in Iraq made an appearance today in a bomber vest threatening more deadly attacks ahead. 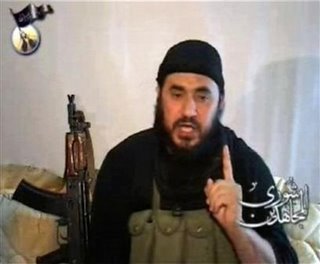 The leader of al Qaeda in Iraq, Abu Musab al-Zarqawi, speaks in a video posted on the Internet on April 25, 2006. (Reuters)

Zarqawi calls the new government in Iraq a “poisoned dagger” in the heart of Islam:

Analysts believe al-Zarqawi is showing his face to demonstrate that he is still engaged as a leader of jihad, or holy war.

The message also appeared to be an attempt by the leader of al-Qaida in Iraq to rally Iraqis and foreign fighters to his side at a time when U.S. and Iraqi officials are touting political progress as a setback to insurgents.

Al-Zarqawi appeared in the 30-minute video, which he said was made Friday, dressed head-to-toe in black with a black scarf around his head and a beard and mustache.

He seemed healthy, shown in one scene standing and firing a heavy machine gun in a flat desert landscape that resembled the vast empty stretches of western Iraq, where he is believed to be hiding.

It’s a 34 minute video. Here are a few quick observations:

* He looks well fed, healthy
* He likes to wear black
* He’s packing a bombers vest just like the rumors
* He has horrible eye contact
* The music is good, the singing is good
* Whoever put the video together knows a thing or two about computers
* They should find out where they sell the black mock turtle-necks and wait there.
* The thugs are looking at a map towards the end of the tape. – It would be nice to know what they are looking at and talking about during that segment.

The Jawa Report has interesting analysis of the video.

Bill Roggio at the Counterterrorism Blog explains that this is his first video without a mask and directly posted on internet, not released through Al Jazeera.
Pajamas Media has a roundup and obervations.

Meanwhile… the failed suicide bomber whose husband blew up over 60 people at a Jordanian wedding party last year, says that she only entered into a marriage of convenience to execute the suicide attacks. 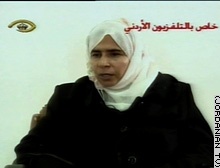 She married only to travel to Amman, Jordan for the attack but her suicide belt failed. According to the Times Online:

Sajida Rishawi allegedly agreed to take part in the attack to avenge the deaths of her two brothers and a Jordanian brother-in-law, all al-Qaeda fighters who died in US-led operations against the Iraq insurgency.

She was shown on state TV allegedly confessing to her role in the attack, for which Abu Musab al-Zarqawi, the Jordanian leader of al-Qaeda in Iraq, has claimed responsibility. She is the only one of eight defendants — including al-Zarqawi — who is in custody, and faces the death penalty if convicted.