Cheney gets mixed reception as he throws out the first pitch in Washington,
VIDEO HERE 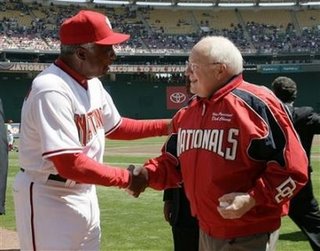 The Associated Press headline reads Cheney was booed loudly in throwing out the first pitch at the Washington Nationals home opener, yesterday. :

He stood directly in front of the mound and released a ball that hit the dirt in front of home plate. Nationals catcher Brian Schneider scooped it up.

Cheney wore a red-and-blue Nationals jacket that seemed bulky, perhaps filled out by a bulletproof vest. Security agents ringed the top edge of the outdoor stadium.

Clearly this was not a one sided crowd reaction that the AP describes in their headline.

And, here’s another flattering AP shot of the Vice President on Monday. 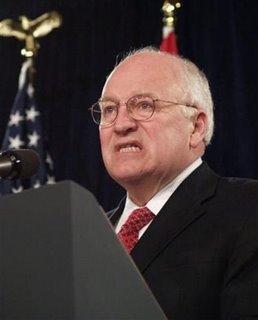 Gee, do you think there is any bias at the AP?

Wonkette has thoughts opening day.
Crooks and Liars also has the same video.