Last week on the same day that Iran surprised the world that they may have successfully enriched uranium to 3.5%, they were elected Deputy on the UN Commission of Disarmament.

Not that this was really that shocking coming from the United Nations. Back in January, 2003, months before the start up of the War in Iraq and while weapons inspectors were investigating the Saddam Hussein government, Iraq moved into the lead position at the United Nations Disarmament Committee.

Today, Majority Leader Bill Frist (R-TN) condemned the United Nations for this absurd and insulting move in regards to Iran. 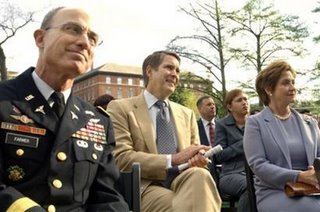 Here is a part of Majority Leader Frist’s letter condemning the United Nations:

Over the last week, Iran has declared that it is now enriching uranium. Enriched uranium is the critical part of a nuclear weapon, and the most difficult item to acquire. So if this capability is perfected and expanded, Iran can use this enriched uranium to make nuclear weapons. The United Nation’s reaction? It recently made Iran a leader of the United Nations Disarmament Commission by making it vice-chair.

Iran’s vice chairmanship of the Disarmament Commission is absurd – and insulting to Americans who recognize that Iranian development of nuclear weapons is a grave threat to the US and its interests, and totally unacceptable. It is also sadly predictable from an organization that has elected Libya to the chairmanship of the United Nations Commission on Human Rights.

The United Nations needs far-reaching reform and it needs it now. The Bush Administration has pushed for reform, but it has fallen on deaf years in New York. Too many countries like things the way they are: fat salaries for large staffs; little or no oversight of UN activities and programs; a complicated and opaque bureaucracy that prevents accountability; committee memberships that allow countries to block criticism of their own actions; indecision or consensus-based measures that amount to little; and so on.

Worse yet, the United States pays the largest share of UN dues (22%), followed by a handful of other industrialized democracies that all together provide the bulk of the UN’s funding. Meanwhile, US proposals are routinely blocked by those opposed to who or what America stands for, while a host of corrupt or rogue regimes use the UN as a forum to advance their own nefarious interests—underwritten by US taxpayers no less.

One step in the right direction would be to deprive the soon-to-be-formed United Nations Human Rights Council of any American support. Despite superficial “reforms,” this new body is all too susceptible to being compromised by the world’s worst offenders of human rights.

Right on! That disgraceful Human Rights Council is still a sham! The UN went through a year of meetings to come up with a pathetic remake where it is guaranteed that at least one non-free or partially free country will be setting Human Rights policy for the rest of the Free World.

Jimmy Carter actively campaigned AGAINST the US to get this Human Rights proposal passed. Already, China, Iran, Cuba, Russia, Venezuela and Algeria are in the running for positions on the Council.

This week China was accused of harvesting organs of thousands of executed prisoners each year to sell for organ transplants… There’s a reason why the Falun Gong protesters are so upset with China’s communist leaders.

Senator Norm Coleman (R-MN) also spoke out strongly against the appointment of Iran to the Disarmament position today and is also recommending withdrawing support.

Small Dead Animals from Canada says it is past time we evict this group (UN) from our continental shores.