The New Editor has the latest infatuation piece from the New Yorker:

…It is close to inconceivable that the country and the world would not be in far better shape had Gore been allowed to assume the office that a plurality of voters wished him to have. One can imagine him as an intelligent and decent President, capable of making serious decisions and explaining them in the language of a confident adult…

Is this how a confident adult explains difficult decisions? 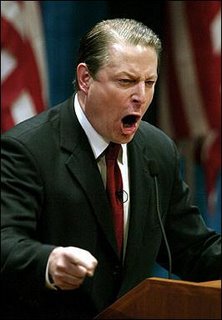 “He played on our fears!”
The New Editor has more on Al the pedagogue (dull, formal, or pedantic teacher).

And, much love today for the loser in 2000 from the Washington Post… Again, via The New Editor:

But it is the thought that matters — the application of intellect to an intellectual problem. Bush has been studiously anti-science, a man of applied ignorance who has undernourished his mind with the empty calories of comfy dogma. For instance, his insistence on abstinence as the preferred method of birth control would be laughable were it not so reckless. It is similar to Bush’s initial approach to global warming and his rejection of the Kyoto Protocol — ideology trumping science. It may be that Gore will do more good for his country and the world with this movie than Bush ever did by beating him in 2000.

… Gore, at last, is a man at home in his role. He is master teacher, pedagogue, know-it-all, smarter than most of us, better informed and, having tried and failed to gain the presidency, he has raised his sights to save the world. We simply cannot afford for Al Gore to lose again.

The poor democrats at the Washington Post. What a pretty world they picture without the dogma driven Christian in the White House. Why couldn’t he be a Godless lout instead of a man driven by principle? And, surely Al Gore would be the right pedagogue to deal with President Mahmoud Ahmadinejad instead of the warmonger.

I guess we will never know!

Jim Hoft
Jim Hoft is the founder of The Gateway Pundit, one of the top conservative news outlets in America. Jim was awarded the Reed Irvine Accuracy in Media Award in 2013 and is the proud recipient of the Breitbart Award for Excellence in Online Journalism from the Americans for Prosperity Foundation in May 2016.
Vulgar Chicago Mayor Who Told President Trump to "F-U" Now Wants to Fire Cop Who Flipped Off Protesters
Today is 76th Anniversary of D-Day - This Is Why We Stand for the National Anthem
Peaceful NY Protest Leader Threatens to Go Down to the (Jewish) Diamond District Tonight with Gasoline (VIDEO) ...Update: Protester Arrested!
MUST SEE: Look What Democrats, their Media and the Violent Left Did to Three Great American Cities in JUST ONE WEEK
AMAZING! Archbishop Carlo Maria Vigano Sends President Trump Encouragement During this Dark Hour in US History in Battle Between Good and Evil
See more...