Mohammad could not handle the exposure… 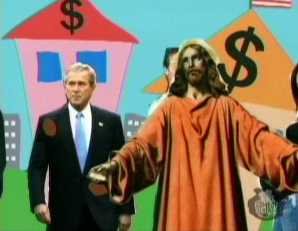 …but, Bush and Jesus made a joint appearance getting pooped on.
(picture via Michelle Malkin)

The Anchoress sends this article from the Washington Post on the censored “South Park” episode that aired last night:

The comedy _ in an episode aired during Holy Week for Christians _ instead featured an image of Jesus Christ defecating on President Bush and the American flag.

In an elaborately constructed two-part episode of their Peabody Award-winning cartoon, “South Park” creators Matt Stone and Trey Parker intended to comment on the controversy created by a Danish newspaper’s publishing of caricatures of Muhammad. Muslims consider any physical representation of their prophet to be blasphemous.

…As is often the case with Parker and Stone, they built “South Park” around the incident. In Wednesday’s episode, the character Kyle is shown trying to persuade a Fox network executive to air an uncensored “Family Guy” even though it had an image of Muhammad.

The executive decides to strike a blow for free speech and agrees to show it. But at the point where Muhammad is to be seen, the screen is filled with the message: “Comedy Central has refused to broadcast an image of Muhammad on their network.”

It is followed shortly by the images of Christ, Bush and the flag.

A frequent “South Park” critic, William Donohue of the anti-defamation group Catholic League, called on Parker and Stone to resign out of principle for being censored.

Did they think we’d get all nuts about a cartoon Jesus “pooping” on Bush? Personally, their cartoon is much less offensive to me than the daily “pooping” the press and the left and the “experts” deliver to Christianity, President Bush and the nation in general. That stuff is doing real damage.

Michelle Malkin has been all over this story today.
Great! Michelle opened up for comments on her post on “South Park”!

Volokh Conspiracy has the latest on this.

Hat Tip to Larwyn who has been following this story!

What’s next? A ban on kissing?