Some Images Are Just Not Fit to Print

Sorry for the disturbing image!

Blasphemous images like this could scar one for life.

The other picture was published front page center of the Los Angeles Times, yesterday. 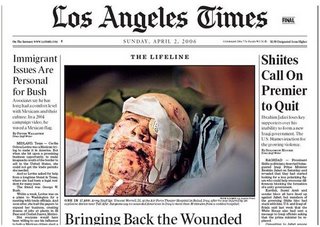 Winds of Change has the story of the Army Staff Sergeant injured in Iraq (Via Instapundit).

One image did not fit the standards of the newspaper. The other image was on message.