Duke DNA results completed. State crime lab shows exotic dancer lied. No DNA from any of the young men tested showed up on the woman, her clothing, her body,…
VIDEO HERE

DNA testing failed to connect any of the Duke lacrosse players to the Carolina stripper who had charged them with rape.

Several dozen people gathered Sunday outside the house where the party took place, and pledged to return each Sunday until the case is resolved. 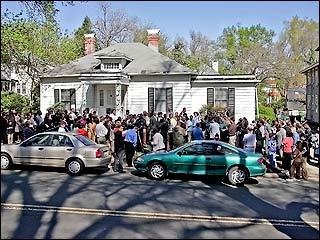 A crowd of protesters gather Sunday at the site of the alleged rape. Charges have not been made in the case. (AOL News)

No DNA from any of the players tested connected them to the exotic dancer:

Citing DNA test results delivered by the state crime lab to police and prosecutors a few hours earlier, the attorneys said the test results prove their clients did not sexually assault and beat a stripper hired to perform at a March 13 team party.

No charges have been filed in the case.

“There is no DNA evidence that shows she was touched by any of these boys,” said Attorney Joe Cheshire, who represents one of the team’s captains.

The alleged victim, a 27-year-old student at a nearby college, told police she and another woman were hired to dance at the party. The woman told police that three men at the party dragged her into a bathroom, choked her, raped her and sodomized her.

The Associated Press does not name alleged victims in sexual assault cases.

The allegations have led to the resignation of coach Mike Pressler, the cancellation of the lacrosse season and the suspension of one player from school.

The case also led to days of protests on and off the Duke campus, and some of the players have moved for safety reasons.

Pack up the cameras. You’ve been played by a stripper. 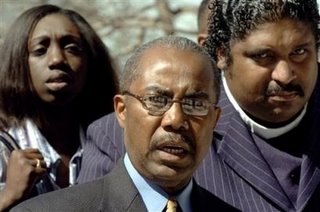 Rev. James W. Smith, of the Interdenominational Ministerial Alliance of Durham and Vicinity National Assocaition, center, addresses the media along with Tracy Egharevba, president of Duke University’s chapter of the NAACP and NAACP state chapter president Rev. William Barber, right, Thursday, April 6, 2006 in front of the Durham County Courthouse in Durham, N.C. The NAACP will keep watch on authorities as they continue to investigate allegations that members of Duke University men’s lacrosse team raped an exotic dancer Barber, the leader of the state chapter pledged Thursday. (AP Photo/Sara D. Davis)

Durham attorney Bill Thomas said some of the photographs, taken when she arrived at the house, indicate the woman was injured before getting to the party March 13. They show extensive bruises and scrapes on her legs, especially around the knees, he said.

“This young lady was substantially impaired. She had fallen several times during the course of the evening,” Thomas said.