They were all “Dancing on the Bombed Out Ceiling” in remembrance of US air strikes 20 years ago. 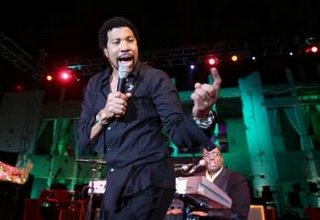 Libya remembered the US bombings from 20 years ago with a concert in front of one of the bombed palaces:

US soul singer Lionel Ritchie and Spanish tenor Jose Carreras performed in front of the bombed house of Libyan leader Muammar Gaddafi in the capital.

About 40 people died in the attacks on 15 April 1986, including Col Gaddafi’s adopted daughter, Hanna.

President Ronald Reagan ordered the strikes, accusing Libya of involvement in bombing a nightclub in Berlin.

Two US soldiers and a Turkish woman were killed and least 230 people injured in the explosion.

The BBC’s Rana Jawad in Tripoli says the anniversary of the raids on Libya was marked in a surprisingly festive way.

In 2001, a German court ruled that the Libyan secret service was responsible for the Berlin attack.

Tripoli has agreed to compensate victims, but refuses to do so for the US families saying Libyans also had a right to be compensated.

Libya is looking forward to improving relations with the US far from the logic of force pursued by Reagan.