Safia al-Suhail moves into the spotlight in Iraq.

Omar at Iraq the Model has the latest on the political maneuvering going on in Iraq including this exciting rumor that Safiya al-Suhail may move into a powerful Iraqi Cabinet position:

Salih al-Mutlaq the leader of the other secular bloc in the parliament (11 seats) told al-Sharq al-Awsat that he supports giving one of the deputy PM posts to a woman, namely Safiya al-Suhail from the Iraqi list.

The reason why I think al-Suhail has a good chance is because one of the two deputy PM posts is the share of her bloc, so if she gets the support of the bloc and if Allawi decides to find another place for himself we might be able to see a woman in one of the most powerful places in the government, but of course this also would need that Islamists in large blocs do not vote against her, and here I think they will hesitate to vote against her for fear from being accused of discrimination.

Iraq the Model has the rest of the good news on the formation of the Iraqi cabinet that may be finalized this week. 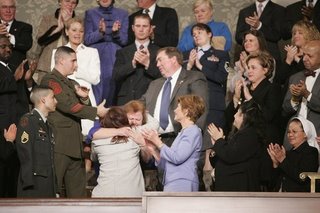 Americans recognize that spirit of liberty, because we share it. In any nation, casting your vote is an act of civic responsibility; for millions of Iraqis, it was also an act of personal courage, and they have earned the respect of us all. (Applause.)

One of Iraq’s leading democracy and human rights advocates is Safia Taleb al-Suhail. She says of her country, “We were occupied for 35 years by Saddam Hussein. That was the real occupation. Thank you to the American people who paid the cost, but most of all, to the soldiers.” Eleven years ago, Safia’s father was assassinated by Saddam’s intelligence service. Three days ago in Baghdad, Safia was finally able to vote for the leaders of her country — and we are honored that she is with us tonight. (Applause.)

Safia, the Iraqi Ambassador to Egypt worked to ensure women’s rights under the new Iraqi Constitution. 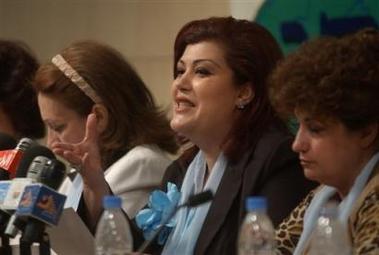 Safiyah al-Shuhail, center, speaks with other prominent women in Iraq during a meeting on Monday, Aug. 1, 2005, in Baghdad, Iraq to discuss the future of women’s rights in Iraq. (AP)