Good News from the Quagmire!

Rumsfeld says there is no question about it, the formation of the new Iraqi Government is another step closer to US troop withdrawal,
VIDEO HERE

Condoleezza Rice made a surprise visit to Baghdad today to congratulate and meet with the new Prime Minister designate in Iraq. 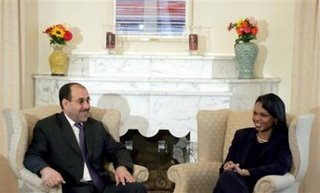 US Secretary of State Condoleezza Rice made a surprise visit to join Defense Secretary Donald Rumsfeld in Iraq today to show support for the new elected democratic government.

The top American commander in Iraq expressed optimism that Iraq’s selection of top government leaders marked a major step toward creating conditions that could allow a substantial number of U.S. troops to leave in the months ahead.

Secretary of State Condoleezza Rice flew in from Turkey a few hours later to shore up the U.S. show of support.

During a press conference today, the top US general in Iraq spoke of major US troop reductions this year:

Casey did not elaborate on his timeline for reducing U.S. forces, but he has said in the past that a “fairly substantial” reduction could be made this year if the insurgency did not grow worse and if Iraq made continued progress on the political and security training fronts.

Asked whether the breakthrough agreements last weekend to name Jawad al-Maliki as prime minister and to fill six other top government posts moves U.S. officials closer to implementing the expected troop reductions this year, Casey replied, “It certainly is a major step in the process.”

“We just want to make sure there are no seams between what we’re doing politically and what we’re doing militarily,” Rice told reporters on her plane en route to Iraq. “Secretary Rumsfeld and I are going to be there together because a lot of the work that has to be done is at that juncture between political and military.”

She and Rumsfeld huddled with the U.S. ambassador and other top U.S. military and civilian officials for lunch and then planned to meet jointly with the newly designated prime minister.

Rice scheduled a separate one-on-one meeting with him later.

Al Maliki was selected Iraqi Prime Minister designate this past weekend after Ibrahim al-Jaafari caved in to pressure from Kurds and Sunnis to step aside.