Students brawled at Hart High School in Santa Clarita, California today over the planned immigration protest next week. Around 75 students were detained for fighting and refusing to go to class. 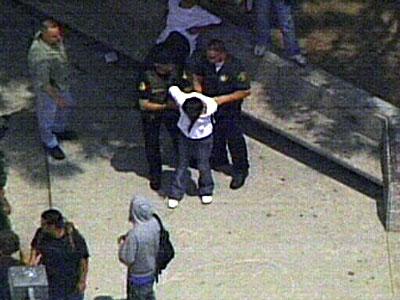 The fight at Hart High School involved a confrontation regarding Monday’s planned boycott, authorities said. Students were sent home for the day. (NBC4)

NBC4 says that the fight broke out over the planned protest on Monday:

The March 25th Coalition, which organized a massive rally in downtown Los Angeles that attracted about a half-million people, has urged a boycott of school and work on Monday to show support for immigrants. Marches and rallies are expected across the Southland that day.

The fight at Hart High School was sparked by racial tensions. 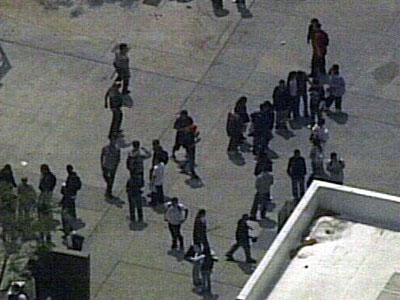 Authorities responded to a fight Friday afternoon at a high school in Santa Clarita. (NBC4)

Local Radio KHTS has more on the story:

Authorities are saying the fight started when a confrontation occured regarding Monday’s planned Immigration Act boycott. Hart High School administration have started to evacuate students in small groups. According to William S Hart District Asst. Superintendent Mike Von Buelow, rumors began circulating around Hart High School about a planned fight at lunch time. According to Von Buelow there was no physical altercation, just students verbally attacking eachother. Students will be fully evacuated by 3:00pm today. Helicopters are currently monitoring activity at the school.

UPDATE: (2:00pm) Around 75 students have been detained for fighting/refusal to go back to class. Administrators are currently considering evacuating the campus in small groups of students to reduce the risk of another fight breaking out. We will keep listeners and parents informed as more information comes in.

Here is an official statement from the Hart School District:

Due to threat of an altercation between students at Hart High School, the campus has been put on “Safe Mode” and Sheriff’s deputies are on site to insure the safety of all students. The majority of students are in their classrooms and will be held there as long as necessary to insure their safety.

Ace of Spades has thoughts on the planned protest of millions of illegal immigrants shutting down US cities on Monday.