Since getting the boot from Saddam Hussein’s defense team, Aisha Qaddafi, has decided to settle down with her father’s cousin.

Or Does It Explode explains that this was the real reason that Lionel Richie was in town this past week. 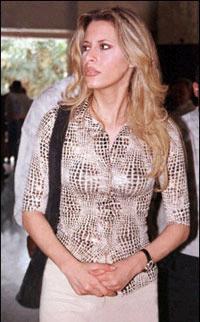 Aisha is also known as the Claudia Schiffer of North Africa.

Lionel already had the Libyans “Dancing on the Ceiling” at the 20 year anniversary celebration of the Libyan Palace bombings.

There is no word if the Qaddafi’s brought in the little candle-waving angels to sing “We Are The World” at the reception like at the bomb blast anniversary party.