First, the Qaddafi family gathers at the Qaddafi palace ruins and invites Lionel Richie to sing “It’s Easy Like Sunday Morning” in remembrance of the Libyan palace bombings 20 years ago.

Then… Since the West is going to be Muslim in a few dozen years anyway, why not invite George Bush to the Hajj. 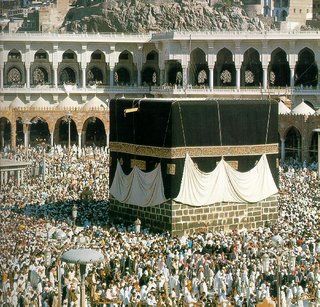 Hopefully it won’t be a stampede day.

Now, Watching America reports that Moammar Qaddafi thinks George Bush ought to attend the Hajj in Mecca, since Europe and America will be Muslim soon, anyway:

Libyan President Moammar Gadhafi on Monday invited Jews and Christians to take the pilgrimage to Mecca, and insisted that the followers of both religions have the right to take the Hajj, go around the Kaaba, pray between Safa and Marwa and stand at Mount Arafat.

[Editor’s Note: Entrance to the Mecca has always been forbidden to non-Muslims].

In the Malian city of Timbuktu and leading a prayer with the presidents of Mali, Sierra Leone, Niger, Mauritania and Senegal before sitting down for dinner at sunset, Gadhafi asserted that this [attending the Hajj] is a right, not only of Arabs and Muslims, and that he considered Mecca “the meeting place of all peoples except heretics and the vile.”

After leading the prayer, he said that he considered that “People of the Book,” such as Christians and Jews “are not heretics,” and he said “they believe in God and are not vile.” He also dared to suggest that the American President be allowed to take a pilgrimage around the Kaaba, saying that he should not be considered as vile or heretic, and wondering aloud, “if they [Arab leaders] consider him a vile person, why do they befriend him and eat with him?”

Gadhafi gave his assurance that Muslims don’t need “the sword or the bomb to spread Islam,” and expected Europe to become Muslim with a few dozen years. He proved this by pointing to the presence of 50 million Muslims, 14,000 thousand mosques and Islamic centers, and 1,500 Islamic organizations and associations in Europe, in addition to Turkey, Bosnia and Albania joining the European Union.

He considered that “Europe and America face difficult times … as time passes they can either accept that they will become Muslim, or they must proclaim war on Muslims.”

It’s interesting how he shoots off those numbers for European mosques so easily.

Meanwhile, in the soon to be Muslim country of Great Britain, Muslim students training to be imams at a British college with strong Iranian links have complained that they are being taught fundamentalist doctrines which describe nonMuslims as “filth”.