Not your ordinary graduation from the elite Sandhurst Academy, the Queen Mum stops in to see her grandson graduate,
VIDEO HERE

“He will go bananas if he is given special treatment. He doesn’t want to let the rest of the lads and lasses down by opting out. He was always the first to volunteer on exercises.”

Prince Harry, the second son of Prince Charles, is fighting to go fight in Iraq! 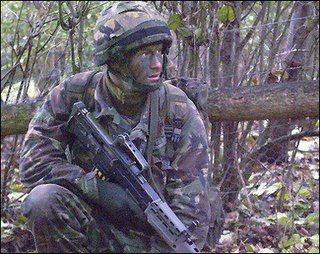 Prince Harry threatened to quit the British army if he is not allowed to go fight in Iraq:

Harry, the 21-year-old second son of Prince Charles and the late Princess Diana, recently completed his training at Sandhurst military academy and is a second lieutenant in the Household Cavalry.

The Mail on Sunday newspaper, quoting unidentified sources, reported that Harry had threatened to resign from the army if he is held out of combat roles.

The prince will soon start a five-month training course leading to becoming a platoon commander in an armored reconnaissance role. The Ministry of Defense said Harry’s unit, the Blues and Royals regiment of the Household Cavalry, will not go to Iraq in the rotation next month, and no date has been set for a possible deployment.

“The intention is for him to undertake the fullest range of deployments” with his unit, said a spokeswoman at the Ministry of Defense, speaking on condition of anonymity in line with government policy.

Harry doesn’t want to let the lads and lasses down. 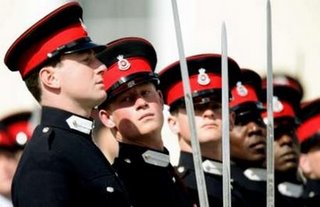 Britain’s Prince Harry (2nd L) marches during the Sovereign’s Parade at the Royal Military Academy in Sandhurst, southern England April 12, 2006. Harry, once dubbed a royal wild child for underage drink and drug antics, graduated as an army officer on Wednesday before joining a regiment that could be sent to Iraq or Afghanistan. (REUTERS/Dylan Martinez)

John Reid British Defense Secretary stepped into the row yesterday and said that Harry should be treated as any other British soldier:

Mr Reid was speaking after it was reported that Prince Harry, 21, had threatened to quit the army if he was blocked from active service because of safety fears.

Mr Reid said the media spotlight was one of the reasons the prince and his brother, William, might not be able to act like any other soldiers.

But he added: “In so far as is humanly possible, I believe the prince should be treated like any other member of the British armed forces.”

Flopping Aces has more on what exactly Prince Harry will be doing in taking the fight to the terrorist thugs in Iraq.