There’s no safe base for Abbas…

“Because of his condemnation of terror, he has harmed the people and must apologize!” 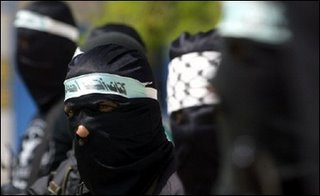 A number of armed factions have demanded that Palestinian Authority president Mahmud Abbas apologise after his fierce condemnation of an Islamic Jihad suicide attack in Tel Aviv.(AFP/Mohammed Abed)

“We demand that brother Abu Mazen (Abbas) apologise to the Palestinian people for the harm that he has done,” said a joint statement read out by a masked militant at a press conference in Gaza City.

The statement was signed by the Popular Resistance Committees and three cells of the Al-Aqsa Martyrs’ Brigades, an armed offshoot of Abbas’s own Fatah faction.

Abbas had strongly denounced Monday’s bombing in Tel Aviv, which left nine people dead as well as the bomber, calling it “a despicable act which harms the struggle of the Palestinian people.” 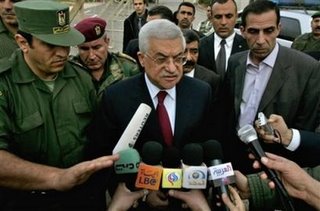 Tensions between the radical Islamist group and the moderate Palestinian Authority president have threatened to erupt ever since Hamas routed Abbas’s Fatah faction in January parliamentary elections and then formed its first ever cabinet.

But with the government unable to pay salaries of its employees nor exert control over the Fatah-dominated security forces, Hamas prime minister Ismail Haniya claims Abbas is now pulling the rug out from under his administration.

Visiting the Jabaliya refugee camp in Hamas’s Gaza Strip stronghold, Haniya on Friday implicitly criticised Abbas by accusing the last Fatah government of leading the Palestinian Authority to the verge of bankruptcy.

It’s not a good day to be sitting President of a community of armed terrorists with no money.

Wizbang adds this on the terror strike from yesterday:

“There you have it. Two official spokesmen for the Palestinian government have reaffirmed all the previous Hamas statements, that a formal state of war exists. No words of condemnation, no pledges to prevent further acts of aggression, just a simple restatement of the long-held Hamas belief that Israel needs to be obliterated.”

And, that is why they are broke! At least until the funds start rolling in from Iran, Qatar, and Algeria.