At least nine are killed at a restaurant in Tel Aviv.

Hamas says the attack was legitimate.
It looks like the decision not to fund this terror regime appears to be a good one.

The Palestinians send in a child for the attack. 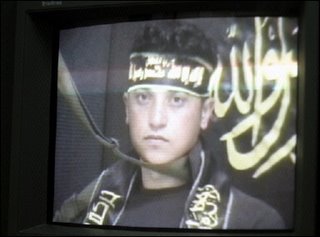 Palestinian suicide bomber Sami Salim Hamadah gives his last testimony prior to blowing himself close to the site of Tel Aviv’s old bus station. Eight people were killed and dozens wounded in Israel’s commercial capital Tel Aviv when the Palestinian militant blew himself up in the deadliest suicide bombing of the last 20 months.(AFP/Abbas Momani)

What kind of a society teaches its children such evil? 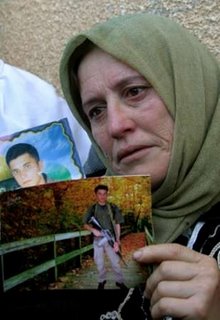 The mother of Sami Salim Hamad, a militant from Islamic Jihad, holds his picture outside the family’s home in the West Bank village of Arakah, near Jenin, April 17, 2006. An Arab television station aired a video tape showing Hamad and said he carried out the Tel Aviv suicide bombing attack on April 17, 2006. Family members said Hamad worked as a waiter in Jenin and told his employer on Sunday he would not be coming back to work. Hamad killed nine people and wounded 60 others in an attack a spokesman for Islamic militant group Hamas called an act of ‘self-defence’. (REUTERS/Mohamad Torokman)

Since Palestinian people blow up their own children and preach “Shahada” at their public rallies, DISTURBING VIDEO HERE (Via Stand With US), today’s blast gives more urgency to completing an Israeli barrier from such barbarianism.