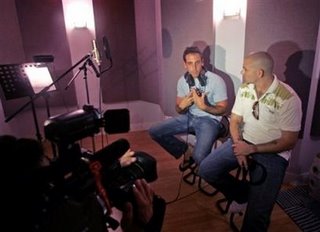 The controversial Spanish-US National Anthem is being released today under a firestorm of controversy:

Adam Kidron says that when he came up with the idea of a Spanish-language version of the U.S. national anthem, he saw it as an ode to the millions of immigrants seeking a better life.

But in the week since Kidron announced the song _ which features artists such as Wyclef Jean, hip-hop star Pitbull and Puerto Rican singers Carlos Ponce and Olga Tanon _ it has been the target of a fierce backlash.

Some Internet bloggers and others are infuriated by the thought of “The Star-Spangled Banner” sung in a language other than English.

“Would the French accept people singing the La Marseillaise in English as a sign of French patriotism? Of course not,” said Mark Krikorian, head of the Washington-based Center for Immigration Studies, a think tank that supports tighter immigration controls.

The initial version of “Nuestro Himno,” or “Our Anthem,” comes out Friday and uses lyrics based closely on the English-language original, said Kidron, who heads the record label Urban Box Office.

The song is being recorded in several locations throughout the world including Madrid, Spain and Puerto Rico:

Due May 16 via Urban Box Office, a portion of the project’s proceeds will benefit pro-immigration organizations including the National Capital Immigration Coalition. The Washington, D.C.-based group has been active in organizing protests ongoing immigration debate in the halls of the U.S. Congress and has committed to use “Nuestro Himno” at its upcoming events.

Other artists whose participation in the new recording of the anthem has been confirmed are Aventura & Andy, Ivy Queen, Reik, Kalimba, Voz a Voz, Tito El Bambino, Frank Reyes, NíKlabe, Tony Sunshine, P-Star of Reggaeton Niños and Yemaya. Many others have been invited to take part in UBO-organized recording sessions this week in New York, Miami, Los Angeles, Puerto Rico, Mexico City and Madrid.

President Bush today said that the National Anthem should be sung in English.

LoneWacko has more on the boycott and protests that are planned for May Day where this new version of the National Anthem will make its big debut.

Fausta says to sing it!… in English!