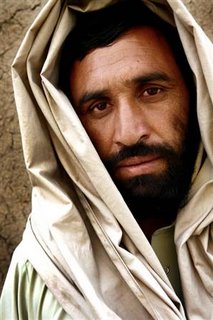 …But, sadly the story about Mohammad Gulab turned into another Newsweek bash on America and the military.

Alek from Eurojihad sends this story from the April 17, 2006, Newsweek. Here are the heart warming segments from this Anti-military, anti-American piece of propaganda:

Last June, foraging for edible plants in the forest near his home in the Kunar-province village of Sabray, Gulab discovered a wounded commando, the lone survivor of a four-man squad that had been caught in a Taliban ambush. Communicating by hand signs, Gulab brought the injured stranger home, fed and sheltered him for two days and helped contact a U.S. rescue team to airlift him out.

Gulab has been paying for his kindness ever since. Al Qaeda and the Taliban dominate much of Kunar’s mountainous backcountry. Death threats soon forced Gulab to abandon his home, his possessions and even his pickup truck. Insurgents burned down his little lumber business in Sabray. He and his wife and their six children moved in with his brother-in-law near the U.S. base at Asadabad, the provincial capital…

…Word spread fast among Gulab’s neighbors that he had taken an American into the village’s protection. The jihadists soon heard the same thing. Their commander, an Afghan named Qari Muhammad Ismail, sent the villagers a written demand for the fugitive. Gulab and other village men answered with a message of their own: “If you want him, you will have to kill us all.” Sabray has roughly 300 households altogether. “The Arabs and Taliban didn’t want to fight the village,” says Gulab.

For the rest of this article about how Afghanistan is a horrible quagmire and how the Americans fighting in Afghanistan are lying, secretive, cold-hearted, and selfish you’ll have to read the rest at Newsweek.

I am not sure if I trust part of Mohammad’s story, but I do hope that he gets the assistance he needs. Apparently, Newsweek is still taking the word of a foreigner over the word of US military personnel. Some things never change.