Iraqi Prime Minister designate Jawad al-Maliki says his cabinet will be lined up in two weeks instead of one month. Condoleezza Rice and Donald Rumsfeld gave their approval to al-Maliki on Wednesday. 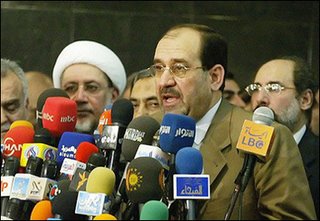 Iraq’s new Prime Minister designate Jawad al-Maliki (C) speaks to the press following a parliament session, in Baghdad, on Saturday, April 22. Maliki said that he expected to have his cabinet line-up ready for approval in two weeks. (AFP/Sabah Arar)

Haider Ajina- Iraq’s Prime Minister’s real name is “Noory Kamil Mohamed Hasen Al-Maliki” (exact spelling is at the discretion of the owner) the name Jawad Al-Maliki is a name he took to protect himself and his family during his fight against Saddam. He will probably go by the name “Noory Al-Maliki”.

The following is Haider Ajina’s translation of news in Iraq’s Aswat Al-Iraq on April 23rd:

“Basrah province (home to the second largest city in Iraq) announced the formation of the council of consultants. This council has 24 members. These members are representatives of political parties, Sunni leaders, Shiite leaders and heads of local tribes. The council published their covenant during celebrations of their formation. The covenant requests; “Not killing any innocent, not attacking education, politics, government, tribal or religious centers and all houses of worship.”

In the south of Iraq (strong Shiite majority) matters have been far more peaceful than in Baghdad. The local elected government has had the luxury of focusing on improving the local economy & day to day life of its residence. Forming this council is an example of the unity of Iraqis and their willingness to include and protect all sects and faiths. What is even more important is the single message these types of councils send. The message is that of condemnation of terror and divisiveness and protection of the innocent.

On Tuesday, Al-Maliki told Iraq’s neighbors, “Do not interfere with Iraq’s affairs!” 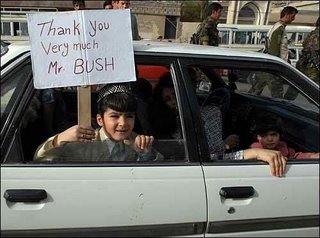 The following is Iraqi-American Haider Ajina’s translation of news in Iraq’s Alsabah newspaper on April 25th:

Baghdad inspector general, “Corruption in government management has had a noticeable decline”

Baghdad inspector general office announced that administrative and financial corruption in Baghdad’s government offices has declined noticeably in comparison to a year ago. The inspector general’s office has obviously been on the right track to deter these incidences.

The inspector general of the capital (Tama’ah Jebar Loog) in an interview with ‘Alsabah’ said that his office has ended 117 cases of administrative corruption and forwarded thirty of them to courts. Forty other cases are currently under investigation. This significant number of cases has contributed to the decline in corruption. Our doors remain open to all the populace who have a complaint or incidents involving government employees. We have set up complaint boxes and direct hot lines to accommodate our citizens.

Loog talked about conferences & meetings held with government employees to discus and talk about negative issues and areas of disorder. This was done to focus on remedies and ways to prevent all types of government corruption. It is important to implement the special laws governing the inspector general office and the administration, during these challenging times. Specially law ‘57’ concerning the inspector’s offices and keeping them independent from the government allowing it to perform its duties properly.

Loog added that his office which has a budget of 600 million Iraqi Dinars has contributed greatly to the reduction of administrative corruption by responding to complaints and dealing with them. He concluded by asking the press and the citizens of Iraq to help the inspectors office by providing accurate information and its sources. The press has a duty to inform the public so we may all reach the same goal, that of protecting public assets and the beauty of our capital city. 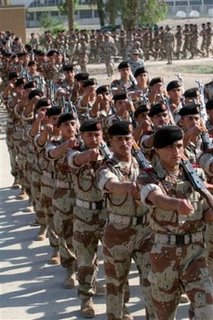 Newly graduated Iraqi Army officers march during a ceremony marking the completion of the one year course by 158 Iraqi officer candidates who were instructed by Iraqi, and Multi-National Force officers Wednesday April 26, 2006 in Baghdad, Iraq. (AP Photo/Khalid Mohammed)

As Paul Bremer III left Iraq he created the “Inspector General’s” office. An office, which’s duty, is to oversee government administration, uncover and prevent corruption, increase government efficiency and collect public complaints against government administration and bureaucracy. He made the office independent of the government and judiciary and insisted on its independence. This decision is paying tremendous dividends in uncovering and preventing corruption. The office has a long ways to go but its usefulness and independence is serving Iraqis well. This office is quite unique in the Arab world. Most citizens in Arabic countries are at the mercy and whim of their government and bureaucrats with minimal if no avenues for grievance. This oversight of government gives the Iraqi populace a great sense of wroth and ownership of their country. Iraqis realize that the government is here to serve them and the public interest not a few elite nor it self.