The mixed crowds got a little rowdy today outside a Bush speech in Irvine, California. 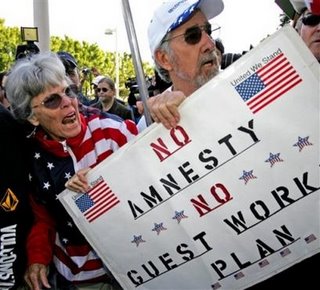 Minutemen and peace-niks tussled outside a Bush speech today in Irvine, California:

“I’d like to see them start deporting those who are here illegally and start supporting our borders,” said Barrow, a Republican who said she voted for Bush in 2000 and 2004 because he was “the lesser of two evils.”

Nearby, anti-Minuteman demonstrators chanted “We didn’t cross the border, the border crossed us.”

Jim Luna, 40, a legal immigrant who came to the United States from Guatemala at 5, said he opposed Bush’s policies and believes illegal immigrants are pawns for American corporations.

“They want the cheap labor and Mexico encourages it because they are getting money from all the illegals who send money back,” Luna said.

Also in the cluster was Marya Bangee, 19, one of about 20 Muslin students from the University of California, Irvine who came to protest Bush. 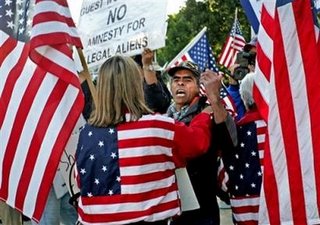 Even members from the infamous Muslim Student Union from the University of California Irvine sent representatives to protest President Bush. 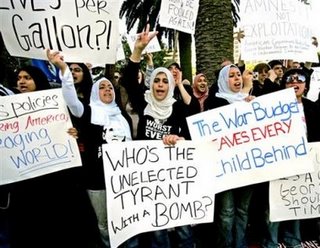 Women from the Muslim Student Union at University of California at Irvine protest the President and the Iraqi war at the Hyatt hotel in Irvine, Calif., where President George W. Bush spoke to Orange County business leaders on Monday, April 24, 2006. (AP Photo/Branimir Kvartuc)

For those of you who may have forgotten, in 2004 the Muslim Student Union (MSU) of University of California-Irvine asked graduating Muslim students to wear green sashes bearing the word “shahada,” the Arabic word for “martyrdom.” The Muslim world refers to a suicide bomber who kills innocent civilians in Israel as a “shahid.”