Somehow, I don’t think this will help the open border crowd. 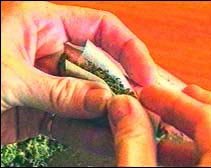 Mexico is expected to pass a law that will legalize the possession of marijuana, cocaine, peyote in small quantities:

Possessing marijuana, cocaine and even heroin will no longer be a crime in Mexico if the drugs are carried in small amounts for personal use, under legislation passed by the Mexican Congress.

The measure given final passage by senators late on Thursday allows police to focus on their battle against major drug dealers, the government says, and President Vicente Fox is expected to sign it into law.

People caught with larger quantities of drugs will be treated as narcotics dealers and face increased jail terms under the plan.

The legal changes will also decriminalize the possession of limited quantities of other drugs, including LSD, hallucinogenic mushrooms, amphetamines and peyote — a psychotropic cactus found in Mexico’s northern deserts.