In early February, Muslims in London protested against the Danish Muhammad cartoons:

Omar Zaheer was one of those arrested after the protests for inciting racial hatred… (Let’s hope his lawyer cleaned him up some for the trial.) 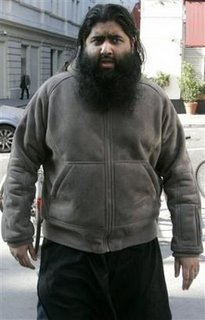 Omar Zaheer arrives at Bow Street Magistrates Court in London Friday April, 7, 2006, to face charges relating to an alleged breach of the peace in February 2006 during protests in London against published cartoons depicting the Prophet Muhammad. (AP Photo/Kirsty Wigglesworth)

The protests by Muslims took place on February 3 and 4 outside the Danish Embassy in London over the publication of cartoons ridiculing the prophet Mohammed.

Demonstrators waved placards reading ‘Butcher those who mock Islam’ and ‘Behead those who insult Islam’.

A Scotland Yard spokesman said: “Detectives investigating offences believed to have been committed during a demonstration in central London on February 3 2006 have this morning arrested a 23-year-old man at an address in north London.

“He has been arrested under Section 4 of the Offences Against the Person Act (soliciting to murder). He is in custody at a central London police station.

“This arrest is part of an ongoing operation – Operation Laverda.”

The arrest comes after officers collected video, audio and photographic evidence from the crowd. Police were critised for not arresting the protestors at the time.

Although, both have British roots, there appears to be no relation between Omar… 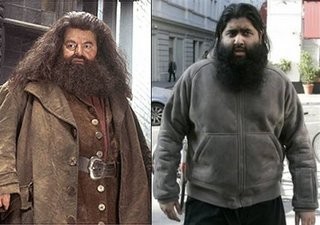 Fellow protester, Omar Khayam, was already sent back to prison to finish a previous sentence for selling crack after he was arrested for wearing a suicide bomb vest at the protest in February.

I’m still trying to figure this one out… 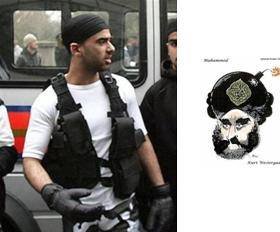 Omar Khayam was later arrested and sent back to jail to serve the rest of his sentence for selling crack, an offense which carries a mandatory death sentence in some Muslim countries:

Omar Khayam is a British Muslim who is known to have been a drug dealer in Bedford, England. He was convicted in 2002 of selling crack cocaine, and sentenced to six years’ imprisonment. Released on parole in 2005, having served half of his sentence, he hit the headlines after attending protests against the Muhammad cartoons in London dressed as a suicide bomber, less than a year after the 7 July 2005 London bombings which killed dozens of people.

He was featured extensively in news reports, such as on the front page of The Sun who initially asked for his identity amid outrage against his protest endorsing the deaths in London. When tracked down, he initially refused to apologise saying his protest was justifiable. However, apparently following criticism from local Muslims, he came out and apologised alongside local Labour MP Patrick Hall.

After his apology it did not take the newspapers long to find out about his conviction for selling drugs, which are haram (prohibited under Islam), and which carry a mandatory death sentence for trafficking in several Muslim countries.

On 7 February 2006, following heavy publicity, it was revealed that he had been arrested by Bedfordshire Police and returned to prison for unspecified parole violations [3]. Following a Parole Board hearing, he could be forced to serve the three years remaining of his sentence.