Maybe Alexandra at All Things Beautiful had it right… 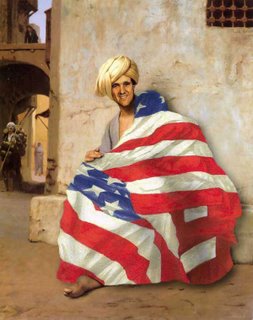 Michael Crowley at The Plank (Via Instapundit):

Continuing his campaign for the Democratic presidential nomination, John F. Kerry addressed (by telephone) a conference convened by that racist hustler and prevaricator Al Sharpton who won, if I’m not mistaken, exactly one delegate at the party convention in 2004…

…It wasn’t surprising that he also went off and said, “Not in one phrase uttered and reported by the Lord Jesus Christ, can you find anything that suggests that there is a virtue in cutting children from Medicare.” I’d actually go Kerry one further: I doubt that Jesus ever mentioned Medicare at all.

Still, it’s probably significant that some presidential aspirants–Kerry, for one–want to demonstrate that there are among them some real live Democrats for God. Or, as the Times said about him, he is “A Roman Catholic, who has struggled at times to talk about his own faith … Mr. Kerry also told the group that he believed ‘deeply in my faith’.” Now, there are many Catholics including high ecclesiastics who doubt this. But who am I to have a point of view on what is essentially an intramural fight?

In any case, as it turns out, Kerry is not only a Roman Catholic but also an ecumenicist. Once again I rely on the Times: Kerry asserted that “the Koran, the Torah, the Gospels and the Acts of the Apostles had influenced a social conscience that he exercised in politics.”

My God, what bullshit politicians feel obliged to utter! Or maybe the bullshit is already second nature, or even first. But since Kerry raised it, let me ask: What hadith of the Prophet influenced him the most, and why? And here I have a personal interest: Which of the injunctions of Leviticus and who among the Prophets have the most meaning for him?

Oliver North has more on John Kerry’s “Recipe for Disaster” today in the Washington Times.
Via Powerline.