Are you wondering how to pay for those mounting education costs? 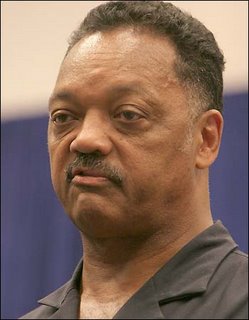 Jesse Jackson and his Rainbow Push Coalition have donated full tuition to the woman who accused the Duke Lacrasse team of rape… even if her story proves false!

The Rev. Jesse Jackson said Saturday his Rainbow/PUSH Coalition would pay the college tuition of a black woman who alleges white members of the Duke University lacrosse team raped her.

The 27-year-old woman, a student at North Carolina Central University, told police she and another woman were hired to strip dance at a team party. The woman told police that three men at the party dragged her into a bathroom and raped her March 13.

No one has been charged in the case, but the allegations have rocked the community. Jackson he has yet to speak with the woman, but said his group pledged to pay for her tuition even if her story proves false.

The woman should be able to support her two children and pay her tuition without having “to sacrifice her body to make money.”

If your little girl is having trouble making ends meet Jesse may be able to help.

DNA tests on all 46 of the lacrosse team’s white members failed to match any evidence taken from their accuser. Experts believe because of this, there would be very little chance that any of these Duke players had raped the woman. 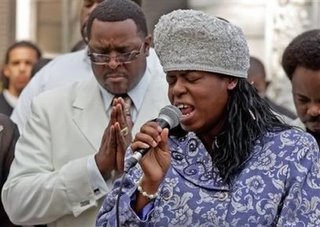 Rhonda Royal- Hatton recites a prayer with Bishop John Bennett, left, at a protest, Sunday, April 16, 2006, in front of the house where a woman alleges she was raped while working as a stripper during a March 13 party thrown by the Duke lacrosse team in Durham, N.C. (AP Photo/ Karl DeBlaker)

Bare Knuckle Politics has more on the free ride.

The race baiters gathered again at the house of the attack for what they called a “healing rally” today.