Tony Snow gets clean bill of health from his doctor and will take the White House Press Secretary job, tomorrow. 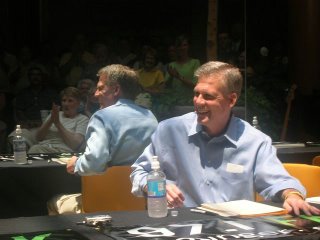 Tony Snow made a stop in St. Louis in June of last year in support of the Soldier Ride Organization. Tony also was promoting his radio talk show. Here is a picture I took of Tony sitting in on a panel at Plaza Frontenac with other 97.1 FM Talk Radio hosts.

Long before the announcement, oddsmakers were banking on Snow, host of FOX News Talks’ “The Tony Snow Show,” to be tapped for the highly visible White House post.

“I expect to see him at the podium in just a few days, in the press room at the White House,” Fred Barnes, editor of The Weekly Standard and a FOX News contributor, said Tuesday.

The talk radio host was given a clean bill of health by his oncologist Tuesday, following a CAT scan and other tests that were undertaken last Thursday. Sources said Snow was President Bush’s first choice, but he needed the all-clear from his doctors before he takes the job. Snow is recovering from colon cancer.

Congratulations to Tony Snow on the career move. And, more importantly, congratulations on your successful recovery!
Good luck with Helen Thomas and the gang!

Atlas says it is “mad hot”… that means it is a good thing.
California Conservative suspects that the Rove/Snow team will sharpen things alot and go on the offensive on a daily basis.